How to survive MRT breakdown 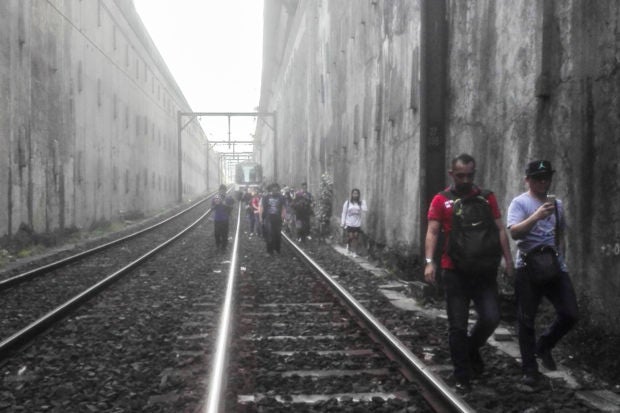 MRT IN TROUBLE   MRT 3 passengers walk along the rails after their coach detached from the train two weeks ago. —SINAG DE JESUS/CONTRIBUTOR

Filipinos can still make light of the sorry state of the Metro Rail Transit 3 (MRT 3), tweaking the final question posed to the Top 3 finalists in the Miss Universe beauty pageant in Las Vegas, Nevada, on Monday.

“What quality in yourself are you most proud of and how will you apply that quality to your time as an LRT (Light Rail Transit) or MRT passenger? #missuniverse,” @HecklerForever asked netizens on his Twitter account.

He drew out witty and pageant-worthy answers from riders who not only had to deal with trains that frequently break down but also with passengers who elbow their way through to get a ride.

“Thank you for that wonderful question. I believe I am [a] woman who isn’t bothered by the long lines, won’t really mind if she stand for hours—rather enjoy the view and appreciate the world she lives in. A silent fighter, who can handle situations as she gets to her final destination,” @AOL28 said.

For RJ Valencia, patience is a virtue one needs to survive the commuter trains in Metro Manila.

“As an MRT passenger, you have to be patient. You have to be a perfect example to everyone. Don’t get mad when you hear the words ‘technical difficulty.’ Because I know for a fact that waiting is the key to everyone’s success,” @rjvalencia said.

Just weeks after a coach decoupled from an MRT train, netizen Allen proved that his life of daring could help him get through the challenges posed by the country’s busiest train system.

“I believe that I am a risk-taker. That even if the trains are dilapidated and frequently break down, and this agency scrimps on us, I still continue to ride [the trains] for the benefit of the DOTr (Department of Transportation). And I thank you!” @_ALLENoid said in Filipino.

Echoing Miss Universe 2015 Pia Wurtzbach, Jeyef Francisco said that being a train rider was both an honor and a responsibility.

“I have the courage to walk [through] the railways should technical issues happen which we can show to the world, the universe rather that we are confidently beautiful with any type of trains. I thank you,” Francisco said.

This month, MRT 3 figured in several glitches and other problems that prompted DOTr Undersecretary for Rails Cesar Chavez to resign.

Shortly after the government terminated its maintenance contract with Busan Universal Rail Inc., MRT 3 limited its operations to just 15 trains.

A female passenger, who felt dizzy, lost her arm in an accident when she fell through the gap connecting two train cars. Fortunately, Angeline Fernando’s arm was reattached by doctors.

Days later, a coach got decoupled from the main car as it approached Buendia station. The MRT 3 management pointed to a possible sabotage as the cause of the incident.

Notably, just a day after Chavez resigned, an MRT 3 train was removed from service after a small gap on the coupler was discovered as passengers were being unloaded at the Taft Avenue station.

Based on its initial investigation, the MRT 3 management said the rubber bushing in the coupler, which connects two train cars, suffered from “normal wear and tear.”

They assured the public that though there was a gap in the coupler, this did not mean that it could have resulted in another train decoupling incident.

On Monday, passengers were unloaded at the Cubao and Shaw Boulevard stations due to technical problems.

The DOTr earlier said that despite the problems, it was determined “to restore convenience and reliability for the 500,000 daily riders of MRT 3, and that it will leave no rock unturned, until it has delivered on that promise.”