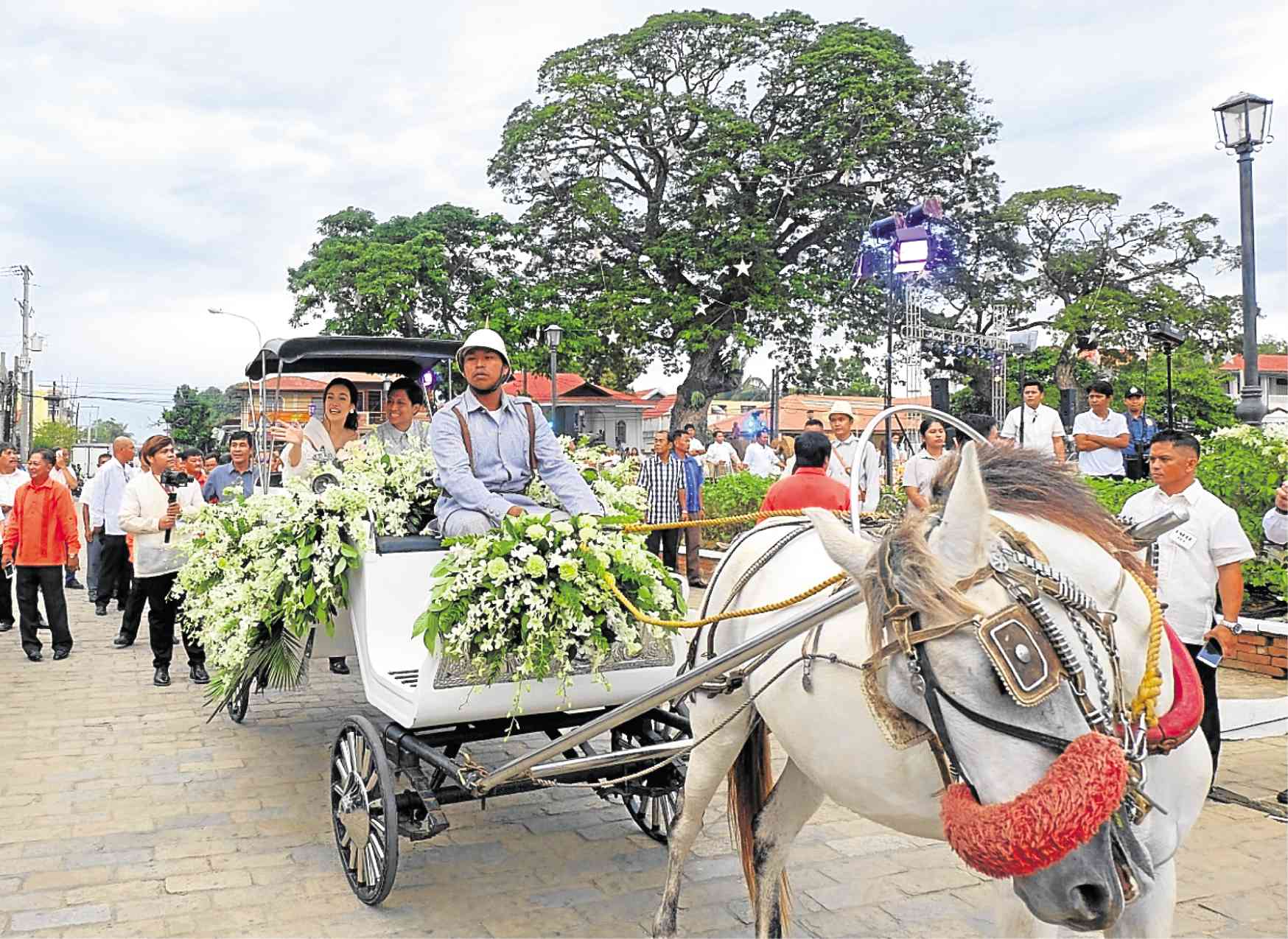 PAOAY, ILOCOS NORTE— When lawyer Michael Ferdinand Marcos Manotoc took Carina Amelia Gamboa Manglapus as his bride in a private wedding in Makati City on Nov. 22, officials here could not let it pass without celebrating the union in the traditional Ilocano way.

On Saturday night, the majestic Paoay Church lit up for the grand celebration of the marriage of a Marcos and a Manglapus.

Along with the late Senators Benigno Aquino Jr. and Jose Diokno, the older Manglapus was one of the leading opposition leaders during the martial law regime of Marcos.

When Marcos died in Hawaii in 1989, Manglapus, founder of the Movement for a Free Philippines, opposed the return of the dictator’s remains to the country.

The enmity 25 years ago was largely unspoken during the ceremonies attended by Michael’s mother, Ilocos Norte Gov. Imee Marcos, and Carina’s mother, Lynn. Carina’s father, Francis, did not join the Ilocos festivities.

The couple’s traditional “bitor,” however, became a grand gesture for the reunited clans to help with the restoration of heavily damaged Marawi City.

Bitor is a ceremony where family members and guests toss coins and bills on a set of rattan mats, representing gifts that would bring the newlyweds prosperity.

Carina and Michael announced that they were donating all the money collected from the bitor to Marawi, which was recently liberated from Islamic State-inspired Maute and Abu Sayyaf groups.

The couple has not yet announced how much money was donated but one of the wedding guests, Davao City Mayor Sara Duterte-Carpio, acknowledged the couple’s goodwill. 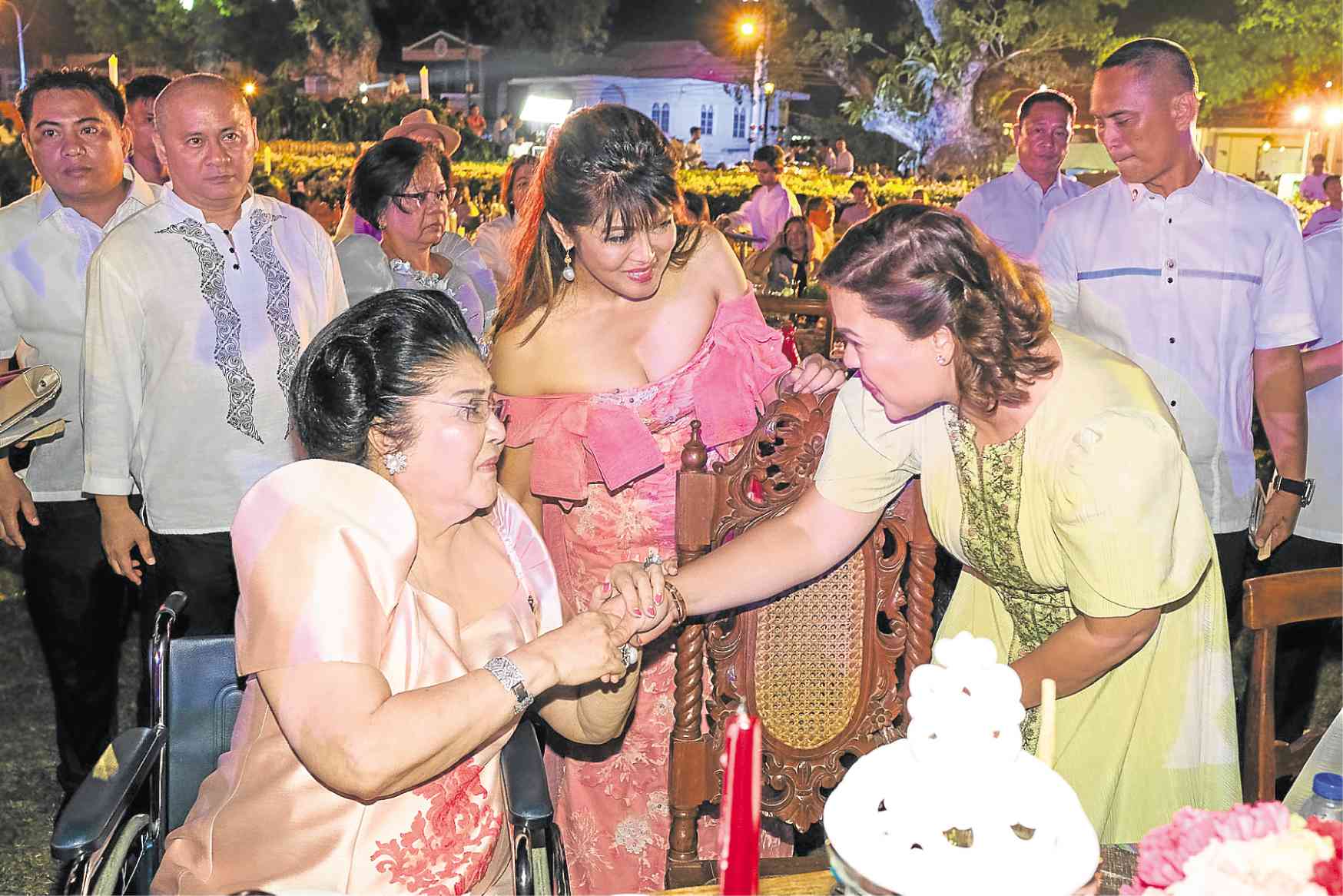 “Everyone is very happy to hear that you are donating part of your wedding gifts to the rebuilding of Marawi, and especially renovating and rehabilitating a madrasah (school) for the children … The Maranaos are very proud and happy of your assistance,” she was quoted as saying in an Ilocos Norte provincial government statement.

The Davao mayor’s husband is from Paoay.

President Duterte, Sara’s father, sent Environment Secretary Roy Cimatu to represent him. Cimatu, who was born in Bangui town in Ilocos Norte, flew here from Baguio City where he attended the Annual National Mine Safety and Environment Conference.

Governor Marcos described her second son’s wedding as the “first of my life.” The Paoay ceremony is called “bales,” which is staged by couples who marry outside their hometown.

Michael, a law graduate of the University of the Philippines, traces his roots to Batac, while Carina, a graduate of Ateneo de Manila University, has her roots in Tagudin, Ilocos Sur province.

The Ilocos Norte statement quoted the governor as saying, “Love wins as we celebrate and mend; as we rebuild Marawi. Your Ilocano brothers and sisters have not forgotten you, and with the bitor we hope that you begin anew and rebuild soonest.”