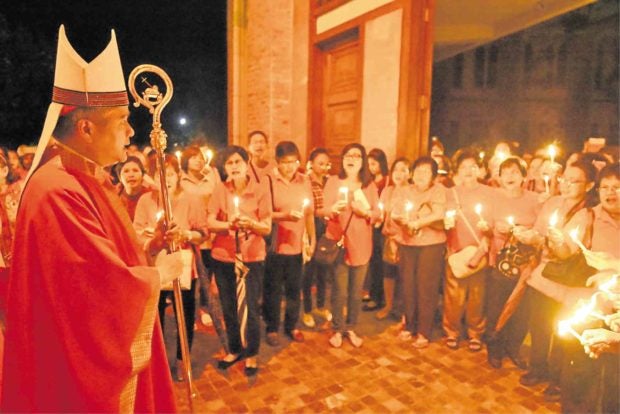 Lingayen-Dagupan Archbishop Socrates Villegas leads prayers outside St. John the Evangelist Cathedral in Dagupan City for Christians who suffered or died for their faith. —WILLIE LOMIBAO

DAGUPAN CITY—Lingayen-Dagupan Archbishop Socrates Villegas on Wednesday urged Catholics to stand up in solidarity with all persecuted Christians around the world, during the nationwide launch of the “Red Wednesday” campaign, which seeks to raise awareness about Christians who suffered and died for their faith.

According to the Catholic Bishops’ Conference of the Philippines (CBCP), the campaign was also launched in the United Kingdom, Australia, Ireland, Italy and France.

“The persecution does not happen by killing, by kidnapping, by putting [Christians] in jail. Christian persecution can also happen in social media, by bashing, by threat, by fake news,” said Villegas, the outgoing CBCP president.

In Nigeria, he said, Christians are kidnapped and Christian women are raped. “That is Christian persecution after 2,000 years,” noted Villegas, who also described it as “a mistake, mystery and a mission.”

Christian persecution is a mystery, he said, because “Christ loves his people and yet God allows his people to be persecuted.”

Those who were not persecuted should make it their mission to stand in solidarity with those who have suffered, he said.

In Cebu City, Basilica Minore del Sto. Niño, the city’s most popular church and home of the country’s oldest religious image, joined at least 80 churches, ecclesiastical territories and universities in the country in celebrating Red Wednesday.

Fr. John Paul Mabanta of the Augustinian Province of Sto. Niño de Cebu-Philippines led the 5:30 p.m. Mass, which preceded the lighting of the basilica’s facade in red, the color that represents the blood shed by martyrs in defense of the Christian faith.

In his homily, Mabanta called on the people to pray for Christians who were barred from practicing the faith, particularly in communist countries and in the Middle East.

“So many Christians undergo persecution. In the Philippines, we don’t feel it because we are free to practice our religion. We are fortunate. But let us remember our brothers and sisters in other countries who are persecuted because of the Christian faith,” he said. —GABRIEL CARDINOZA AND ADOR VINCENT S. MAYOL