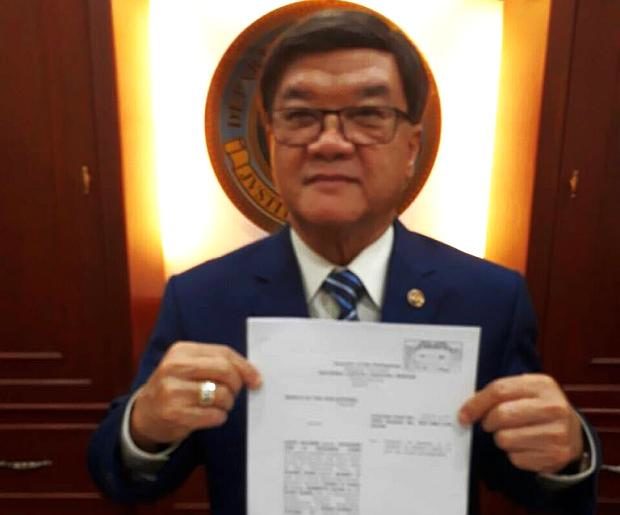 Justice Secretary Vitaliano Aguirre II shows the Information sheet filed in court vs. Taguba and several others. (Photo from the Department of Justice)

The Department of Justice (DOJ) on Wednesday filed at the Valenzuela City Regional Trial Court a case for violation of the Comprehensive Dangerous Drugs Act against customs broker Mark Ruben G. Taguba II and at least nine others in connection with the importation of over 602 kilograms of shabu worth P6.4-billion.

In a joint resolution issued by the DOJ’s three-man prosecution panel, the others who are also facing a case of “importation of dangerous drugs” under Section 4 of the Comprehensive Dangerous Drugs Act of 2002 (Republic Act No. 9165) are the following:

“In finding probable cause against the above-named respondents for the importation of 602 kilograms of shabu, the Panel determined that the combination of the individual participation of each of the respondents, either as shipper, consolidator, facilitator, broker, financier, consignee, or warehouse lessee – reveals a pattern of over acts indicative of conspiracy to import into the country the dangerous drugs,” the DOJ resolution stated.

According to Justice Secretary Vitaliano Aguirre II, the filing of the information in this case “is one way to eradicate this threat for the better future of the youth and loved ones.”

“We want to send a message that any involvement in drugs will be severely dealt with,” Aguirre said. “You deal in drugs and you will suffer the  full consequences.To those who are still involved in drugs, we are coming for you.”

The drug shipment arrived at the Bureau of Customs (BOC) last May 17 and was released from the port on May 23.

Both Chen and Li denied having any knowledge that there were drugs in the shipment, initially declared as kitchenware, footwear and moldings.

During the House hearing on the entry of P6.4 billion shabu shipment in the country, Taguba implicated a trusted aide of Customs chief Nicanor Faeldon, along with several others, in the alleged P270 million in bribes to Customs personnel in exchange for prompt release of shipments.

The Senate also conducted an investigation on the matter. /atm