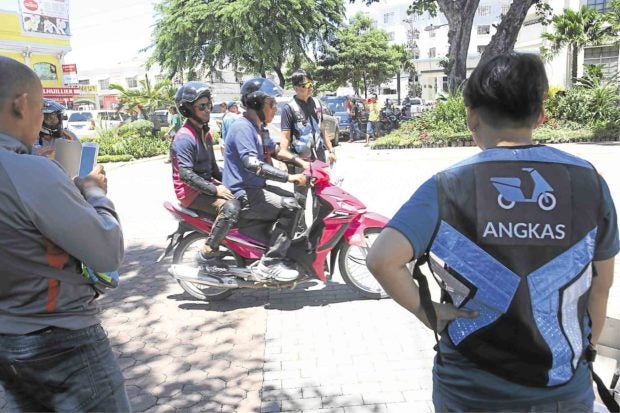 CEBU CITY — Mayor Tomas Osmeña wants the city government to take over the operation of a motorcycle-ride booking service whose operation was declared illegal by the Land Transportation Franchising and Regulatory Board (LTFRB).

“Many people have been texting me about [the ride-sharing service] ‘Angkas.’ Since Angkas is providing a real service to the public, the city government will be studying how to take over [its] operations by hiring their administrative personnel. We will provide Angkas’ service, hopefully using the current app (application). We will do this for free,” said Osmeña in a Facebook post.

In a news conference on Monday, the mayor said the city would adopt the company’s management services and use its online booking system.

Since the city government was not capable of running it, Osmeña said Angkas would have to provide the application.

As soon as Angkas could provide the city government with a proposal, he said it would act as “dispatchers” of the motorcycles.

Should the city hire Angkas’ services, Osmeña said the company would no longer get a share from the driver’s earnings.

The drivers will get 100 percent of their daily earnings, he said.

In its previous arrangement, Angkas gets 20 percent from every booking of its riders.

At least 2,000 motorcycle drivers are connected to Angkas, which in July started offering commuters faster trips through the city’s traffic jams.

But Angkas suspended its operations here on Saturday, a little over a week after transportation authorities shut it down for operating without a permit.

As early as January this year, when Angkas started operating in Metro Manila, the LTFRB already issued the company a warning that its operation was considered “colorum,” since it did not have the necessary franchise to operate.

Since then, Osmeña has been receiving appeals to help bring back the operations of Angkas in the wake of the worsening traffic problem in the city.

“Anything that has to do in providing services for the constituents of Cebu City, that is what I am concerned about,” he added.

The mayor said he was also planning to legalize and regulate the operations of “habal-habal” (motorcycle-for-hire) drivers in the city.

Ahmed Cuizon, LTRFB director in Central Visayas, said he had yet to get the full details of Osmeña’s plan to take over the operations of Angkas in the city but promised to ask guidance from their central office on the proposal.

“Like [ride-sharing services] Uber and Grab, it (Angkas) needs authorization from the LTFRB. Without that, they could not operate. That’s how it works. From the start, we believe that they (Angkas) lack the authority to operate,” Cuizon said.

Under Republic Act No. 4136, or the Land Transportation and Traffic Code, motorcycles could not be used to transport passengers for a fee.