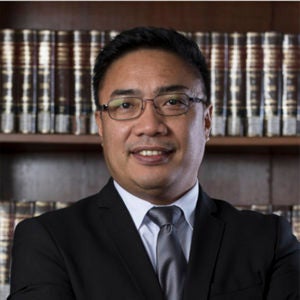 President Rodrigo Duterte’s plan to declare a revolutionary government (RevGov) if his opponents try to topple him from power cannot stand legal scrutiny, the leader of the country’s 60,000 lawyers said on Monday.

“There’s no basis for the declaration of a revolutionary government. The institutions continue to be working, although there might be some attempts to downgrade their capabilities,” said Abdiel Dan Elijah Fajardo, president of the Integrated Bar of the Philippines (IBP).

The country’s lawyers began to close ranks on Monday in the face of Mr. Duterte’s increasingly strident talk of strongman rule as lawmakers slammed the President for continuing to suppress opposition to his policies.

In a talk with reporters on Saturday, Mr. Duterte threatened again to declare a revolutionary government if opposition to his policies went out of control and chaos ruled the streets.

But Fajardo said it might be premature for the IBP or anyone to seek Supreme Court intervention in questioning Mr. Duterte’s warning of a revolutionary government.

As it was made verbally, he said, Mr. Duterte’s threat may not be a justiceable question that could be discussed by the Supreme Court.

But for Neri Colmenares of the National Union of Peoples’ Lawyers, Mr. Duterte may now be considered a “threat” to democracy in the Philippines.

“With what he ha[s] been doing, he’s a threat [to democracy],” Colmenares said.

Human Rights Commissioner Roberto Cadiz challenged the IBP to “stand behind the truth and not behind power” in defending human rights and the rule of law.

Cadiz urged the members of the IBP to take an active role in educating the public on the concepts of justice and human rights.

“Strange as it seems, the sitting President is talking [about] establishing a revolutionary government. Justice, human rights and the rule of law are being mocked by a lawyer aided by and abetted by fellow lawyers,” Cadiz told a news briefing on Monday.

Mr. Duterte is a lawyer. He served as prosecutor in his hometown, Davao City, before being elected mayor there.

“The challenge [for us lawyers] is to realize the relevance of our profession at this point in history and also to be intelligent in parrying the narrative of the present administration,” he said.

Fajardo said the IBP would hold a national human rights summit this week to find ways of assisting the families and victims of summary killings and other human rights violations.

He said the gathering would also help deal with the legal issues pertaining to Mr. Duterte’s bloody war on drugs.

Lawmakers blasted Mr. Duterte’s plan as an excuse to impose authoritarian rule on the country.

In a statement, Albay Rep. Edcel Lagman said Mr. Duterte’s threat to set up a revolutionary government because of destabilization attempts would have “neither constitutional nor historical ancestry.”

He said it would be a “feeble excuse” for authoritarian rule and a “blatant betrayal” of the Constitution.

Lagman pointed out that revolutionary governments emerge after successful uprisings, such as the people power revolt that toppled dictator Ferdinand Marcos in 1986.

He said the Duterte administration could not “stage a coup d’état against itself.”

But Sen. Panfilo Lacson said he did not think Mr. Duterte was serious about his threat to declare a revolutionary government.

In any case, he said, the country could have a revolutionary government “only after a revolution,” like the government that President Corazon Aquino set up after the fall of Marcos in February 1986.

Foreign Secretary Alan Peter Cayetano, who was in the Senate on Monday, tried to ease fears about Mr. Duterte’s threat.

“Take him seriously always on his objective but do not take literally his solution,” Cayetano said.

Analysts were dismayed at Mr. Duterte’s response to opposition to his policies.

Francisco Ashley Acedillo, president of the Institute of Policy, Strategy and Developmental Studies Inc., said the only way Mr. Duterte knew how to govern was to be an autocrat and a dictator.

He said the talk about a revolutionary war became serious after information was filed against Mr. Duterte in the International Criminal Court over the thousands of deaths in his war on drugs.

Acedillo said Mr. Duterte’s threat should not be played down.

Given Mr. Duterte’s volatile character, he said, anything could trigger an action from him and the next thing the country knows, it is under a revolutionary government.