Japan examines how to block North Korean agents in crisis 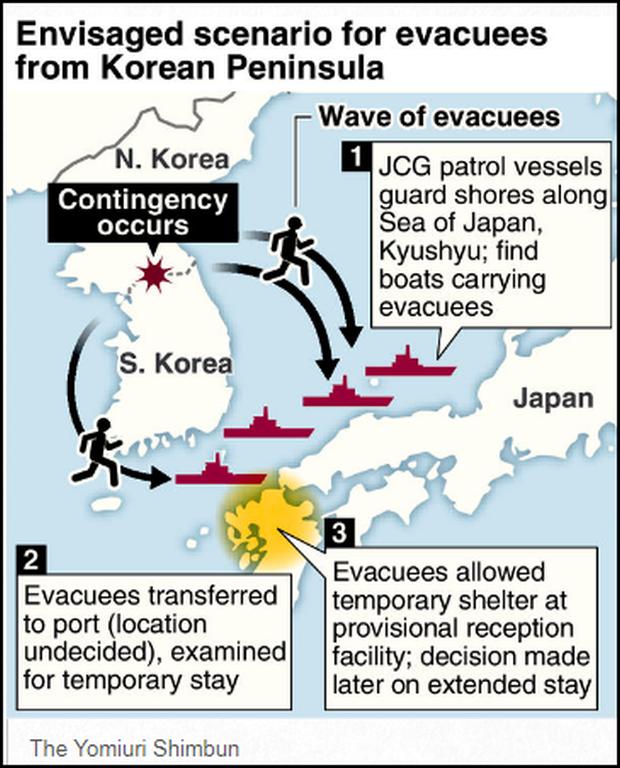 The government has been examining measures to deal with a large number of North Koreans escaping to Japan in the case of a contingency on the Korean Peninsula, The Yomiuri Shimbun has learned.

To prevent the entry of people who could pose security risks, such as North Korean agents, the main policies include reinforcing patrols by Japan Coast Guard vessels in the Sea of Japan and carefully inspecting the evacuees at ports.

People allowed to stay temporarily will receive shelter at a provisional reception facility. Kyushu is the most likely location for the facility, as it is close to the Korean Peninsula.

If the United States launches military strikes on North Korea, the government estimates that “tens of thousands of evacuees from North Korea could reach the Japanese coast by wooden boats and other means,” a person connected to the Japanese government said.

If North Korean agents or terrorists successfully enter the country disguised as evacuees, it is feared they could target vital facilities such as those of US forces stationed in Japan, the Self-Defense Forces and nuclear power plants.

According to the government policies under consideration, JCG patrol vessels will be concentrated in coastal zones in the Sea of Japan. When the vessels locate evacuees’ boats, they will transfer the people aboard to ports designated as operation bases by the government.

The government also seeks to block unauthorized entry by calling for cooperation from private fishing boats and residents in coastal areas.

At the ports, police officers and others will conduct background checks and screen for criminal records. Any evacuees the government deems to pose a security risk will be deported.

The evacuees allowed a temporary stay will be transferred to the provisional reception facility after going through entry procedures at the Immigration Bureau and quarantine stations.

Sufficient attention will be paid to their human rights, providing them with such items as food and water. The government will decide at a later date whether evacuees can remain beyond the period of their temporary stay.

In addition to the provisional reception facility likely to be set up in Kyushu, another facility would be arranged to receive evacuees from South Korea, as they are also expected to arrive.

The government confidentially compiled a detailed plan to deal with evacuees in 1994, when the US military was studying the possibility of attacking North Korea during a nuclear crisis.

Amid the strained circumstances on the Korean Peninsula, with North Korea’s recent developments of nuclear and missile programs, the government has been reviewing the original 1994 plan.

Under the Immigration Control and Refugee Recognition Act, foreign nationals who do not possess passports are prohibited from entering the country, in principle. According to the 1994 plan, it was decided that the government would allow evacuees without passports to enter temporarily and conduct strict screenings on them afterward.