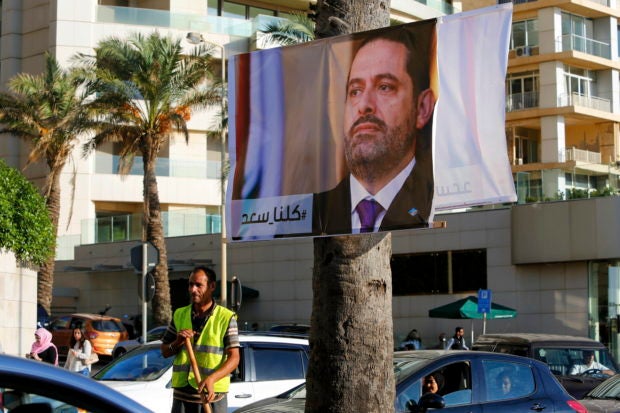 A worker stands in front of a poster of outgoing Prime Minister Saad Hariri with Arabic words that read, “We are all Saad,”, in Beirut, Lebanon, Saturday, Nov. 11, 2017. Lebanon’s president has called on Saudi Arabia to clarify the reasons why the country’s prime minister has not returned home since his resignation which was announced from the kingdom. (AP Photo/Hassan Ammar)

Saudi Arabia has recalled its ambassador to Berlin in protest over comments made by the German foreign minister perceived as suggesting Lebanon’s Prime Minister Saad Hariri had been held against his will in Riyadh, Saudi state media said Saturday.

Hariri, a dual Saudi citizen left Riyadh for France early Saturday following agitated speculation over his situation after he announced his shock resignation on television in Saudi Arabia two weeks ago saying he had left Lebanon in fear for his life.

“Saudi Arabia has decided to recall its ambassador to Germany for consultations and will give the German ambassador in the kingdom a letter protesting these unfortunate and unjustified statements,” SPA said, citing a spokesman for the Saudi foreign ministry.

Hariri’s resignation announcement and his subsequent failure to return home to officially quit in person, fueled speculation that he was acting under orders from his Saudi patrons.

Shortly before leaving Riyadh for Paris, Hariri said in a tweet addressed to Gabriel that it was untrue he was being held in Saudi.

“To say that I am held up in Saudi Arabia and not allowed to leave the country is a lie. I am on the way to the airport,” Hariri tweeted.

Hariri’s resignation was quickly perceived as the latest round in a tug of war between Saudi Arabia, his longtime sponsor, and its regional arch-rival Iran.

It has raised deep concerns about the stability of Lebanon, which has long been riven by disagreements between Hariri’s bloc and that of his chief rival, the Iran-backed Hezbollah movement.

Gabriel on Thursday said he shared the concern about the threat of instability and bloodshed in Lebanon and, without mentioning Saudi Arabia directly, warned against the “adventurism” behind the Lebanon crisis.

Earlier in the week Gabriel had said: “Lebanon has earned the right to decide on its fate by itself and not become a pinball of Syria or Saudi Arabia or other national interests.”

But according to SPA, a Saudi foreign ministry spokesman said: “These statements are dangerous, based on false information and do not help achieve stability in the region.

“These (statements) have astonished Saudi Arabia… which does not consider them representative of a friendly German government that is a reliable partner in the fight against terrorism and to establish security in the region,” the spokesman added.