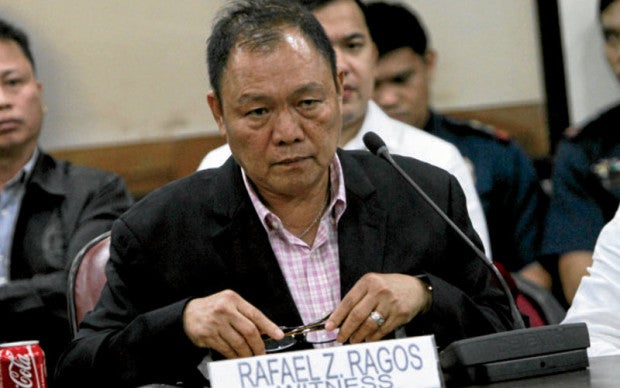 State prosecutors have dropped Rafael Ragos, the former Bureau of Corrections officer in charge, as a co-respondent in one of the illegal drug cases filed against Sen. Leila de Lima.

In a motion to the court on Thursday, the prosecutors said they would like to turn Ragos into a state witness against the detained senator and Ronnie Dayan, her former bodyguard-driver.

“We have asked the court for the dropping of Ragos as one of the accused… We will utilize him as a prosecution witness,”  Senior Assistant Prosecutor Ramoncito Ocampo Jr. said.

De Lima described the prosecution’s move as “very suspicious.” She is scheduled for Tuesday to enter her plea before Executive Judge Juanita Guerrero of Branch 204 of the Muntinlupa City Regional Trial Court.

“It just means that this was a done deal already,” De Lima said as she was escorted out of the court on Thursday. “But I don’t blame [Ragos]. Maybe he was coerced or threatened to do it.”

Her lead counsel, Filibon Tacardon, said they would contest the move of the Department of Justice prosecutors.

“The flip-flopping of the prosecution just shows that they have weak and fake evidence against De Lima,” Tacardon said.