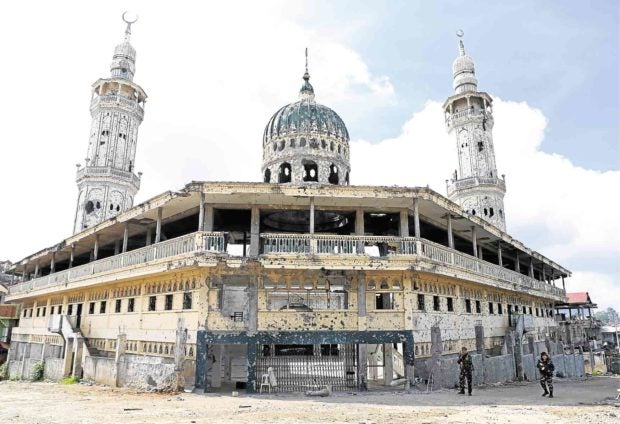 MARAWI ICON Lanao del Sur officials say repairing the iconic Grand Mosque, which was heavily damaged by the fighting between government troops and terrorists, is impractical. Funds are being pooled to build a new structure to replace the mosque. —JEOFFREY MAITEM

Lanao del Sur Vice Gov. Mamintal Adiong Jr. said the mosque, also known as Islamic Center among Marawi residents and which prominently sat on a 2,200 square meter area on Amai Disalongan Street here, was beyond repair, prompting the construction of another structure to ensure people’s safety.

“The dome and the major parts of the structure had been riddled with bullets. The damage weakened the mosque’s structure … We need to build a new one,” Adiong, a civil engineer, said.

Repairing the mosque, he said, was impractical.

Adiong, who along with other Lanao del Sur officials visited the former main battle area here, said an initial fund to rebuild the Grand Mosque had been allocated by “Muslim countries.” The vice governor, however, did not identify the donors or specified the amount of fund pledged.

Marawi City Mayor Majul Gandamra, who also toured the main battle area, said he saw a large number of iconic structures that were destroyed by the fighting.

“I have mixed feelings about what I have seen,” Gandamra said.

He said among the important structures damaged by the war were ancestral homes, including his family home.

Adiong said some buildings and houses near the Grand Mosque, including “Kuta,” the ancestral home of his clan, was flattened by the fighting and airstrikes conducted by the military.

“It is sacred for us because it is where our ancestors were buried,” he added.

Adiong said while most structures could be rebuilt, he admitted that residents of Marawi could never replace homes and other places where they raised their families and which had sentimental value.

In Barangay Marinaut West, where the city’s Rizal Park was located, debris was everywhere. The bust of Dr. Jose Rizal could no longer be seen, prompting a resident to remark that the war’s first casualty was the national hero.

“If you ask who was the first to be decapitated, it was Rizal,” Kadaffy Daromimbang said in jest as what remained of the national hero’s bust was seen among the debris.

Mayor Benjie Balindong of Wato Balindong town said the village of Marinaut West was “beyond recognition.”

An emotional Mayor Ali Sumandar of Piagapo town blamed the Maute terror group for the destruction of Marawi.

“I am incensed at [members of the] Maute [group] because they forced their ideology [on the people], which they believed was correct,” said Sumandar, whose town was also attacked by the group earlier.

Gandamra said rebuilding the city and bringing it close to what it used to be before the war broke out on May 23 would take time.

“It will take years to rebuild Marawi into a better city,” he said.

Aside from the national government’s assurance to help rebuild the city, local officials are also banking on the commitments of other groups and governments, including the United States, to bring back Marawi’s grandeur.

“We express high hopes that they will fulfill their commitment,” Gandamra added.

Usman Saranggani, administrator of Madalum town, was saddened by what he saw inside the former main battle area.

Like Gandamra, he said he was hopeful about the rehabilitation and development of the city.

“If Marawi will rise again from the ruins, it will become a tourist destination, ” Saranggani said.

Col. Generoso Ponio, the acting commander of the Army’s 103rd Infantry Brigade, said the military took the group of Lanao del Sur officials to the former main battle area to help them assess the extent of devastation and take part in the city’s rehabilitation.

“It’s their place so they should decide on what to do with it,” Ponio said. —RICHEL UMEL AND DIVINA SUSON