Maria Isabel Lopez: I’m not a terrorist, don’t single me out

Don’t single me out. I am not [an] ISIS [member] or a terrorist,” Beauty queen-actress Maria Isabel Lopez told reporters after she went to the Land Transportation Office (LTO) on Thursday to explain why her license should not be revoked after she used the Association of Southeast Asian Nations (Asean) lane for VIPs and delegates.

In an interview after the hearing, Lopez said she asked the LTO to impose penalties that are “commensurate” to the offenses she committed.

(I’m not from ISIS or a terrorist that entered the Asean lane so hopefully I don’t get singled out because I’m not the only one who was able to enter it.)

The Metropolitan Manila Development Authority (MMDA) said Lopez’s actions could be considered a security breach for violating policies on the use of Asean lanes and that her actions endangered public safety and government property.

The MMDA also recommended that Lopez be penalized for violating the Anti-distracted driving law when she used her phone and took videos while driving through the Asean lane last Nov. 11. 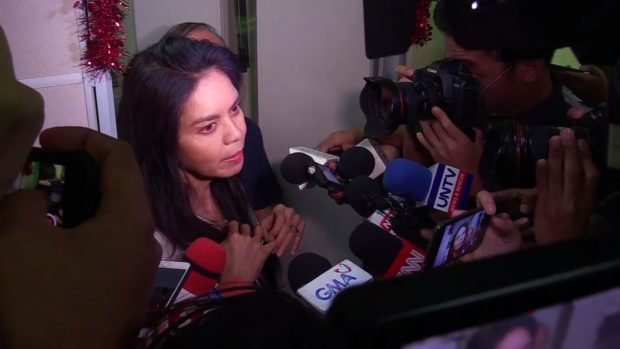 Beauty queen-actress Maria Isabel Lopez talks to reporters after she went to the Land Transportation Office (LTO) on Thursday. SCREENGRAB FROM INQUIRER VIDEO

If she would be penalized, Lopez requested in jest that she be given a senior citizen discount.

(Whatever penalty they give me, I hope they give me a senior citizen discount of 20 percent.)

But the actress was apologetic over the incident.

“Once again, I’m apologizing to the people I have inconvenienced, the public, those people who missed their flights. It was a lapse of judgment on my part. ‘Yung pag-post ko naman sa (My posting on) social media, it’s just like the child in me,” she said.

LTO Law Enforcement Service Director Francis Almora, meanwhile, said that Lopez’s apology had been noted by the board but “violations of traffic rules are in the LTO’s system.”

Earlier during the hearing, Almora said Lopez failed to bring a formal position paper in response to the show cause order. She only narrated her side of the story.

Almora said Lopez’s camp has until Thursday afternoon to submit a position paper. Within five days from the submission, the LTO will issue a decision, he said. /je