Asean concert chaos: Venue for 6K but 27K showed up 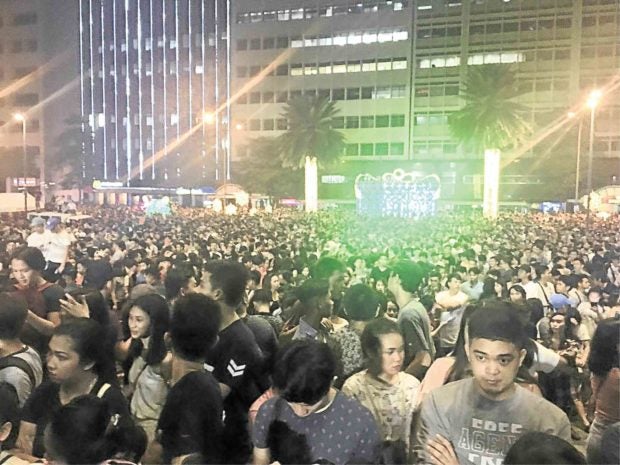 The unexpected turnout and snowballing chaos forced officials to cut short an outdoor music festival held in Makati City, which was earlier advertised as a “breather” to cap the country’s hosting of the Association of Southeast Asian Nations (Asean) Summit.

The pushing and shoving in the mammoth audience during Tuesday night’s Asean Music Festival left more than 40 spectators requiring medical attention due to dizzy spells and difficulty in breathing, including at least eight who sustained minor injuries.

“With so many people and some of them fainting, the organizers decided to cancel the concert,” Police director Oscar Albayalde said in a press briefing on Wednesday.

Albayalde, chief of the National Capital Region Police Office (NCRPO), clarified that the festival, held at Ayala Triangle Gardens in Makati’s central business district, was only timed with the summit but not an official part of the itinerary as there were no foreign delegates or performers involved. “The audience was purely local.”

An online invitation to the event, however, said it was “in commemoration of the 50th anniversary and Philippine chairmanship of Asean” and organized by the Asean 2017 National Organizing Council. The invitation also sported the [email protected] logo.

The NCRPO chief said Ayala Triangle could accommodate 6,000 persons and that invitations were sent out to 10,000— but that 27,000 came for the concert.

Still, Interior Secretary Catalino Cuy maintained there was nobody to blame for what happened. “We are commending the organizer and people on the ground for canceling the concert but the crowd started growing unruly. If it was not canceled, something more serious might have happened.”

The concert started at 7 p.m. but didn’t last even for an hour. The organizers cut it short after the first band on stage, Parokya ni Edgar, finished their fourth song,” Halaga.”

One of the spectators, Angel Britanico, recalled that even during the middle of Parokya’s second song, “Para Sa ‘Yo,” some people in the audience started “thrashing around”  as they made their way to the middle section.

Others even crossed over to the VIP section by “pushing the barricades and hurting other concertgoers caught between them,” she said.

Parokya’s frontman Chito Miranda pleaded with the rowdy crowds to keep their cool for the safety of the women and children. The host, Venus Raj, also called for calm, but to no avail, Britanico said.

“It’s a shame that because some people could not observe discipline and decorum, Parokya’s performance became the first and the last,” she said. “While the turnout was great beyond expectations, the lack of discipline was disappointing at the very least, and threatening at the very worst.”

Umayao said the crowds didn’t thin out immediately after the cancellation but only when the organizers started turning off the lights.

Around 10:35 p.m., the Asean 50th National Organizing Council, the organizers of the music fest, released a statement: “For reason of public safety, we have stopped the show. People are slowly leaving the venue to go home. We are very sorry for the inconvenience.”

Concerned officials of the National Commission on Culture and the Arts, a member of the organizing committee, had yet to respond to a request for an interview as of this writing. Gabi na Naman Productions, on the other hand, said they were only contracted as the marketing and promotions arm of the festival.

In a Twitter post, Parokya frontman Miranda said the event should be a lesson for organizers not to “underestimate how lively the local music scene is.”

“(The organizers) said they didn’t expect that there were that many people who will attend, and they didn’t prepare properly for that. Good thing (there) were no major injuries,” he said. /jpv