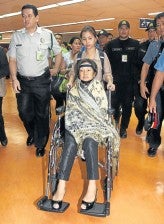 “Should GMA [Arroyo] and her cohorts leave the country and refuse to return to face charges of corruption and poll fraud against her, the Supreme Court justices should be prepared to face the political consequences of their decision,” Bag-ao said.

Lagman said the decision of the Supreme Court reversing the ruling of Justice Secretary Leila de Lima to hold the departure of the former President and her husband, Jose Miguel Arroyo, was a “triumph of civil liberties, particularly the right to travel and presumption of innocence.”

Quezon Representative Lorenzo Tañada III said the court decision was “unfortunate” as there was no urgency for the issuance of the TRO.

“It would have been better if they just waited and decided on the merits of the constitutionality of the Department of Justice (DOJ) Memorandum Circular No. 41,” Tañada said of the Supreme Court.

In the upper chamber, Senator Miriam Defensor-Santiago described the Supreme Court ruling as “an exhibition of judicial sagacity and sobriety.”

Santiago said the DOJ had “no legal basis” to issue watch-list orders based on the memorandum circular.

She rejected the argument that Arroyo’s constitutional right to travel could be suppressed as a matter of “national interest.”

She noted that a person could be barred from traveling based only on three exceptions: national security, public safety or public health.

“It is a very serious and grave mistake to think that national security, public safety and public health can be interchanged with national interest,” she said. “We are putting words in the mouth of the Constitution, that is why the Supreme Court ruling is correct.”

Santiago also described as “full of holes” the argument that Arroyo could no longer be forced to return if she went to a country with no extradition treaty with the Philippines.

“It is not true that just because a country has no extradition treaty (with the Philippines) it does not necessarily signify that Mrs. Arroyo deliberately chose those countries because she wants to hide there,” she said.

Aurora Representative Juan Edgardo Angara said the Supreme Court had no legal liability should the Arroyos travel abroad and decide not to come back to the country.

But Angara said the eight justices, who voted in favor of Arroyo’s petition, would have to face the wrath of the public for allowing the couple to leave despite the fact that they were  on the verge of being charged with plunder and electoral fraud.

Speaker Feliciano Belmonte Jr. said that even Congress was “powerless” to compel one of its members to come back to the country after the travel authority lapsed.

“The travel authority I authorized was November 30 which began on October 18. If they augmented it, I do not know it,” Belmonte said. The revision (adjusting the expiry date to December 5) was approved by the secretary general of the House of Representatives.

Belmonte said Arroyo had initially requested an “open-ended” travel order but he immediately turned it down not because he doubted Arroyo’s intentions.

In the Senate, Senator Panfilo Lacson blamed the DOJ for failing to file cases against Arroyo in court, which was authorized to issue a hold-departure order.

Lacson said the DOJ also “mishandled” the implementation of its watch-list order.

“They were very slow. When did they start handling the plunder cases? It’s been what? Sixteen months since July 1st of 2010 (when they were filed)? They should have done a lot since then,” he said in Filipino.

Senator Franklin Drilon agreed that the government should start filing criminal cases against Arroyo “before the proper courts so that a hold-departure order could be released.”