Marawi LGU starts to pick up the pieces after war 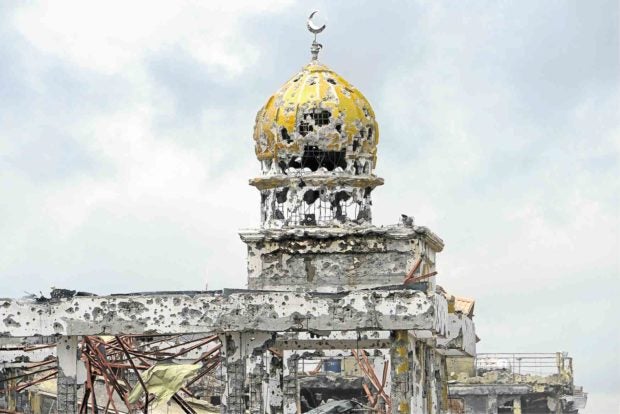 A bombed-out mosque stands in what was once the scene of intense fighting between government troops and Islamic State supporters in Marawi City. The military brought journalists to the area to view what was left of the area following months of fierce battle. AFP file photo

After the five-month battle between terrorists and government forces in Marawi City, the local government is saving anything good beneath those ruins including the Holy Qurans.

Radyo Inquirer reported on Wednesday that the local government of Marawi recovered some damaged holy books found in the Grand Mosque.

(We’re going to preserve the Holy Quran. That is very sacred for us. So even if it’s almost destroyed, it is still important for us, the symbol of our faith.)

Meanwhile, repairs to bring back the Grand Mosque after it was destroyed by the battle will start, Deputy Commander of Task Force Maranao Col. Romeo Brawner Jr. said.

The Grand Mosque is situated at the main battlefield during the clashes between the Maute group and government troops. It was heavily damaged during the siege.

Brawner added that they will ask advice from religious leaders on how to bring back the mosque to its original beauty. /jpv

Read Next
2 domestic flights canceled due to bad weather
EDITORS' PICK
What to watch out for when selecting a video surveillance solution
DOH says COVID-19 cases plateauing, but public shouldn’t be ‘complacent’
House energy committee chair Arroyo bats for cheap electricity
Unleash the photographer in you this World Photography Day with vivo smartphones
23,000 cops to be deployed nationwide for school reopening
Look Through: The fate of impounded stray dogs
MOST READ
Sharon Cuneta asks for prayers for friend in ICU who suffered silent stroke
Light therapy could be the answer to your sleep problems
Korina Sanchez reunites with former ABS-CBN co-anchors Julius Babao, Cheryl Cosim
PBA: San Miguel ousts Meralco to arrange finals duel vs TNT
Don't miss out on the latest news and information.