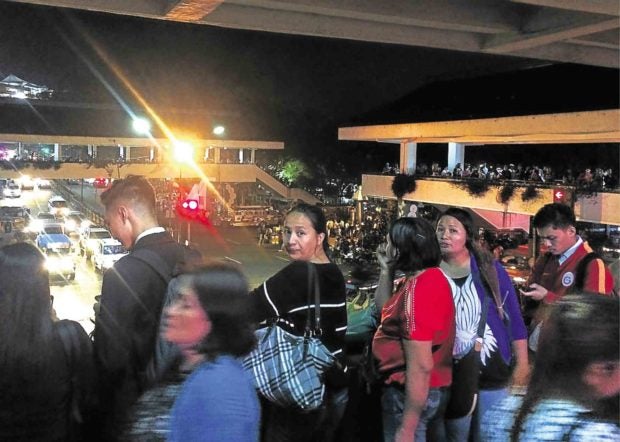 Lines at transport terminals extended to downtown Baguio’s elevated walkways as residents and students wait for their ride home on Monday night. The city received an unusually high volume of visitors, many of them from Metro Manila, who took advantage of the three-day Association of Southeast Asian Nations Summit break. —VINCENT CABREZA

BAGUIO CITY — Classes from preschool to high school here were canceled on Tuesday and Wednesday, following massive traffic jams that stranded for hours thousands of employees and students on Monday night.

The heavy traffic was attributed to the high volume of tourists, many of them from Metro Manila, which is hosting the 31st Association of Southeast Asian Nations Summit, according to Mayor Mauricio Domogan.

The gridlock prevented taxicabs and jeepneys from returning to downtown Baguio to ferry passengers home. Many residents stayed in line at jeepney terminals for two to three hours. Some of the lines extended to pedestrian overpasses and around building blocks.

Some residents walked home after waiting for rides for hours. Even tourists ended up walking.

“Where did your taxicabs go?” a woman asked when she complained of back pains after walking from Teachers’ Camp to Session Road at night.

It took the police until 10 p.m. to untangle the traffic jams, which were concentrated on roads leading to tourist spots like Mines View Park, the Botanical Garden and the Mansion, said Chief Insp. Oliver Panabang, who heads the city police traffic management group.

Many residents turned to social media to rant about their experiences. “Thank you mayor. Our children suffered because they lined up in long queues at jeepney terminals after class due to the traffic jams,” said Eleazar Alec on a Facebook post.

The Monday gridlock was not the first to plague the city. In December 2014, traffic crawled to a standstill when motorists took the Tarlac-Pangasinan-La Union Expressway for the first time on their way to the city. 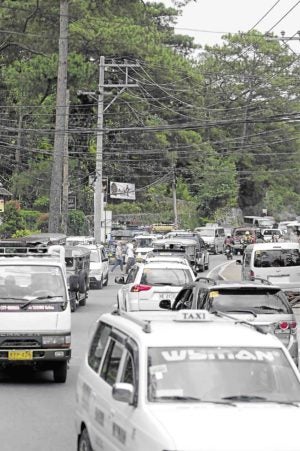 Traffic remains heavy on Leonard Wood Road in Baguio City, leading to tourist spots like the Botanical Garden and the Mansion, on Tuesday. —RICHARD BALONGLONG

Traffic jams are indicators that “Baguio has lost its carrying capacity to serve a population far larger than the 25,000 residents [for which the city] was designed,” retired city architect, Joseph Alabanza, said during a forum on Tuesday to discuss a proposed “smart road, smart traffic” ordinance at the city council.

“What is causing [problems like traffic jams] is the density of population—which has grown to more than 350,000 people—that increases because of transient workers, students and tourists,” Alabanza said.

He said the city’s resources, including water and housing, were no longer enough to serve this huge number of people.

Alabanza said legislation to fix the city’s traffic woes must now include the neighboring towns of La Trinidad, Itogon, Sablan, Tuba and Tublay, all in Benguet province, where growth projects must be diverted.

On Monday night, the police allowed some visitors to park their vehicles at “no-parking zones” to reduce the number of vehicles clogging the main streets.

“What we did was to draw out as much vehicles from the gridlock and distribute them to other alternate roads,” Panabang said.

Some jeepneys opted not to ply their routes on Monday night, he said, adding, “We could not blame them, it would be a waste of fuel getting stuck in traffic.”

“We have anticipated the influx of tourists but we could only do so much. The city’s roads are really too small and could not accommodate the volume of vehicles,” he said. —Kimberlie Quitasol with a report from Vincent Cabreza