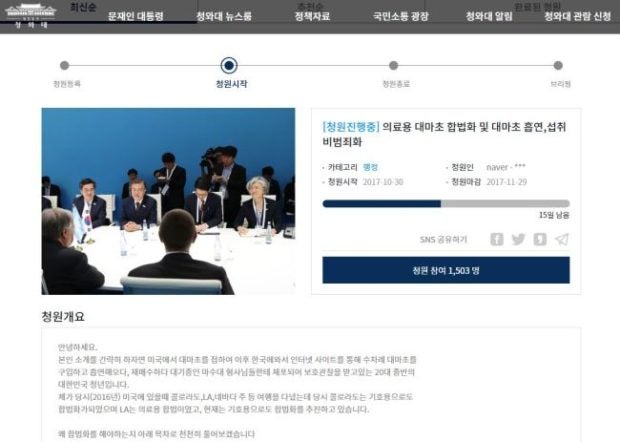 Over 1,500 people joined an online petition calling for the legalization of marijuana via Cheong Wa Dae’s site, Monday.

The petition, launched on Oct. 30, has 15 days remaining until it expires on Nov. 29. A steady stream of people have signed to join in supporting the legalization of medical and recreational marijuana consumption.

The original petitioner is anonymous save for his introduction of himself as being in his mid-20s and under police probation for buying and carrying marijuana in Korea. The man writes how he first came across the substance in 2016 while traveling in a US state where marijuana is legalized for either medical or recreational purposes.

The man explains what marijuana is, its history in Korea and the abrupt prohibition of the popular drug in the 1970s under the Park Chung-hee administration. He argues how global trends are shifting toward embracing the positive effects of marijuana, taking examples from the US where 29 states have allowed the sales of medical marijuana, with some states also giving the green light for recreational use.

The US marijuana industry is on track to post $20.2 billion in sales by 2021, according to Business Insider.

The presidential office has made a rule for itself to issue an official reply to any petition that gathers 200,000 signatures within 30 days.