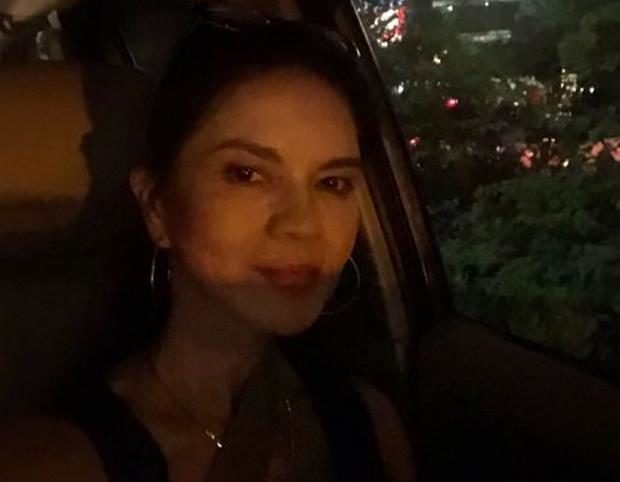 Actress Maria Isabel Lopez posted a selfie and videos of her using the designated Asean lane without permission. (Photo from her Facebook account)

Beauty queen-actress Maria Isabel Lopez apologized on Sunday, saying she was “only human” after authorities and netizens criticized her for using the lane designated for Association of Southeast Asian Nations (Asean) Summit VIPs and delegates.

However, she claimed that a traffic enforcer of the Metropolitan Manila Development Authority (MMDA) gave her and several motorists permission to use the Asean lane.

Lopez complained of being singled out because of her Facebook post which, as of this writing, had garnered over 11,000 reactions, mostly negative, and shared almost 10,000 times.

Her post came with two videos which showed her breezing through traffic even as vehicles in the other lanes were practically at a standstill. “Asean lane, here I come! Be like Maria!” she said in one video.

Lopez said in an e-mail to the Inquirer that she would “issue a public apology” for her actions. “The end doesn’t justify the means but I needed to answer the call of nature because I had been stuck in traffic for three hours. Sorry, but I’m only human.”

According to her, like hundreds of other motorists, she was caught in heavy traffic around 6 p.m. on Saturday on the southbound lane of Edsa near SM Megamall.

Lopez said she asked an MMDA officer if she could use the Asean lane. “He said no because I didn’t have a pass. But I argued that other vehicles—taxi cabs, buses and motorcycles—had already entered the lane.”

She claimed the MMDA officer was even “smiling” at her as she pleaded with him. “[Then] the MMDA officer left in the middle of our conversation because of the taxis and buses behind me. This prompted me to remove the cones.”

“By the time I did it, the MMDA had allowed other vehicles to pass through the Asean lane,” she said, adding that she was speaking out “to make the story complete.”

Transport and security officials have called her actions a “serious security breach.”

Interior department officer in charge Catalino Cuy, who heads the Asean committee on security, peace and order, and emergency preparedness and response, criticized Lopez, saying her actions not only put herself at risk but also the summit’s delegates.

“As a public figure, Lopez must be mindful of the impact of her actions. We tirelessly remind the people that traffic rules are created to save lives and put order in the management of traffic flow, especially now that we are hosting the Asean Summit. We will not allow someone like her to simply put our plans to naught,” Cuy said in a statement on Sunday.