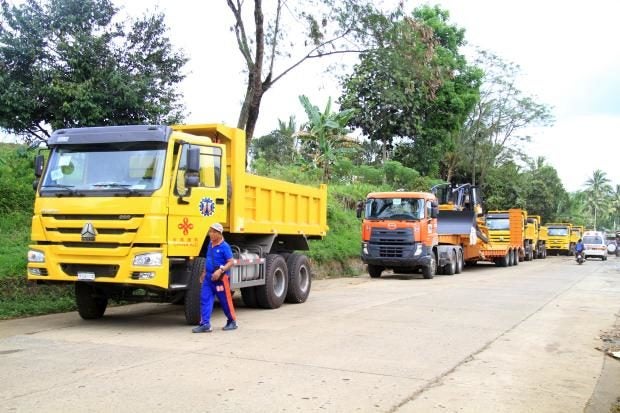 Heavy equipment donated by China are on standby in Marawi. Once military clearing operations are done, the equipment will be used to clear the debris in the battle areas. (Photo by RICHEL UMEL / Inquirer Mindanao)

MARAWI CITY — Government forces conducting mopping up and clearing operations have finally reached the basements of the last two buildings near the Lake Lanao pier here, which served as the last strongholds of the Islamic State-militants who laid siege to this city starting on May 23.

Col. Romeo Brawner Jr., the deputy commander of Joint Task Group Ranao, told the Inquirer that the stench of decaying flesh struck soldiers as they went down the basements but they saw no dead bodies, only concrete debris.

“It seems all those who have stayed in the basements were all dead. These building were where they made their last stand,” Brawner said.

After his arrest on Nov. 1, Indonesian Muhammad Ilham Syahputra said up to 39 militants still remained near the lake after he killed two of his companions because they tried to prevent him from leaving.

Four days after Syahputra’s arrest by members of the Barangay Peacekeeping Action Team of Barangay Loksadatu, troop clashes with a group of militants, killing nine of them.

It was the last clash the troops had with the terrorists here even as they went from one building to another to search for any remaining militants.

Brawner said on Saturday, soldiers continued their cautious move into the remaining buildings – including the two last strongholds of the gunmen – but found no sign of life.

“So far no sign of life or movement and in the other structures but the troops wanted to make it sure that no more terrorists are alive,” he added.

What the troops found, he said, were scores of improvised explosive devices, firearms and ammunition.

He said the completion of the military clearing operation – which would be announced as soon as no more straggler was sighted or found, and that no more IED was discovered, could come anytime soon.

“But as of now, we cannot still do that because your soldiers are still searching to make sure it would already be safe for everyone,” he said.

“The heavy equipment of the Army Engineers are helping in the clearing operations, including the cleaning of damaged structures,” he added.

Housing Assistant Secretary Felix Castro, the field office manager of the Task Force Bangon Marawi, said his team continued to await word from the military about the termination of the clearing operations.

He said this would signal the deployment the Chinese-donated heavy equipment for clearing of more debris from the main battle areas.

“No heavy equipment from DPWH have deployed in the main battle areas either while the government forces are still conducting clearing operations on IEDs and UXOs,” Castro said.