Duterte says he killed a man at 16; joke again? 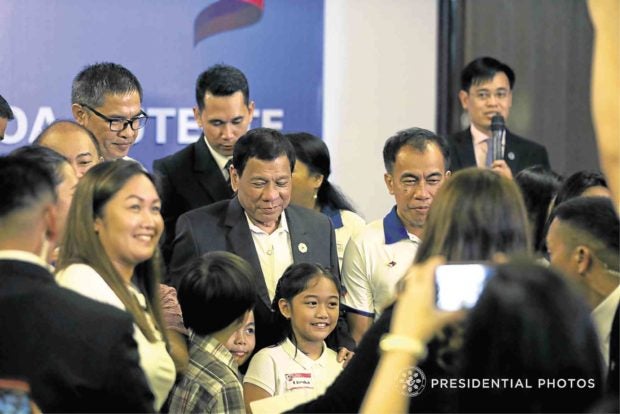 DA NANG, Vietnam—President Duterte said he had stabbed someone to death when he was just 16 years old, but his spokesperson said his claim may have been a joke.

The deed was brought up when he spoke on Thursday night to members of the Filipino community in Da Nang, Vietnam, on the sidelines of the Asia-Pacific Economic Cooperation (Apec) summit, where he said he was not afraid to go to prison for his war on drugs because he was familiar with jails in his teens when he was involved in many street fights.

“It was just an exchange of dirty looks. What more today when I am President,” he added, eliciting laughter from the audience.

Mr. Duterte’s aides have repeatedly told journalists not to believe everything he says, cautioning that he often jokes or indulges in “hyperbole.”

His new spokesperson, Harry Roque, indicated that maybe the case with his stabbing-to-death claim.

“I think it was in jest. The President uses colorful language when with Pinoys overseas,” Roque said in a text message.

Esquire magazine had quoted Mr. Duterte as saying in an interview before he became President that he may have stabbed someone to death when he was 17 years old.

The then Davao City mayor was asked if he remembered the first time he had killed a man.

“Well, when I was young … I was 17,” Mr. Duterte replied. “There was a tumultuous fight on the beach. We were young men then and we went to this beach and we were drinking and suddenly there was this … maybe I stabbed somebody to death … something like that.”

Mr. Duterte, known for his brash sense of humor and foul language, has told journalists that if he made “a preposterous statement, do not believe it.”

“If I say something like that, don’t buy it. If the answer is preposterous or ridiculous, whisper to the one next to you from the Davao media and check if I’m serious,” Duterte said at a news conference shortly after last year’s election. He added that he enjoyed “playing around” and “bantering” with reporters.

But in Thursday’s meeting with Filipinos at Da Nang’s Pulchra Resort, the President was discussing one of his administration’s serious priorities—ending the drug menace.

He reiterated his position that he would continue to go after drug suspects despite protests from human rights activists.

“You fuck with my countrymen, I will not let you go,” he said. “If you make the life of the Filipinos miserable, it is as if you are consigning them to hell alive.”

However, Mr. Duterte said he would not allow extrajudicial killings in his antidrug campaign and would not condone the killing of a defenseless person.

‘I will never do it’

“If you are talking of a man whose hands are tied behind his back or kneeling down with outstretched arms in surrender, and then you say I committed murder, you are crazy. I will never do it,” he said.

More than 3,800 people, who allegedly fought officers during raids, have been killed by the police in the antidrug campaign since Mr. Duterte took office 16 months ago. Thousands more were killed by unknown assailants.

Critics at home and abroad have warned that Mr. Duterte was orchestrating a campaign of extrajudicial mass murder, carried out by corrupt police and hired vigilantes.

He at times denies inciting police or others to kill, but also consistently generates headlines for his abusive language and incendiary comments defending the drug war.

Last year Mr. Duterte said he would be “happy to slaughter” three million drug addicts and branded then United States president Barack Obama a “son of a whore” for criticizing the drug war.

Duterte also said in December last year that he had personally shot dead criminal suspects when he was mayor of southern Davao City to set an example to police.

In Da Nang, Duterte also targeted the United Nations’ special rapporteur on extrajudicial killings, Agnes Callamard, who has been a frequent critic of the drug war.

“This rapporteur,” he said, after referring to Callamard by name, “I will slap her in front of you. Why? Because you are insulting me.”

Mr. Duterte’s comments come ahead of him hosting US President Donald Trump and other leaders in the Association of Southeast Asian Nations (Asean) summit.

Trump has praised Duterte’s handling of the drug war, telling the Philippine leader in a telephone call in April that he was doing a “great job.”

Human rights campaigners have said the summit will be a public relations coup for Mr. Duterte, with Trump and other leaders expected to ignore the drug war controversy.

“The summit messaging will be of feel-good mutual economic win-wins that will ignore the fact that Duterte has inflected a campaign of mass extrajudicial killings,” Kine said. WITH A REPORT FROM AFP