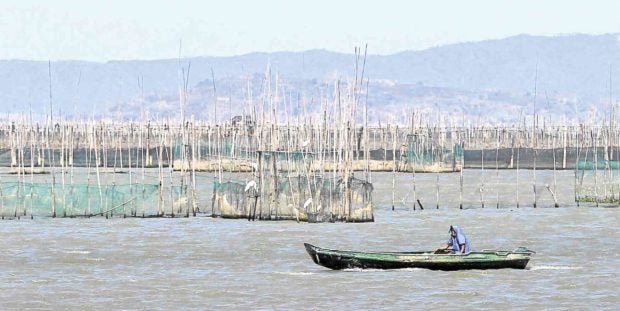 A fisherman passes through a section of Laguna de Bay in Barangay Cupang, Muntinlupa City,where fishpens have been built.—LYN RILLON

The ruling covers fishpens within the “Cataquiz Belt,” a 977.27-ha lake zone in the vicinity of Taguig and Muntinlupa cities in Metro Manila.

The fishpens belonged to 22 corporations and 34 individual owners, who were issued permits to operate in 2003 by former LLDA general manager Calixto Cataquiz.

“They did not undergo the process of bidding [when issued the permits]. They were like, ‘This is where we wanted [to operate] and this is only how much we wanted to pay the government,’” said Maureen Tolentino, LLDA information officer, on Friday.

The LLDA, in August 2013, issued a board resolution that classified these fishpens as illegal. The LLDA resolution also said these were outside the lake’s zoning management plan.

The operators contested the LLDA resolution and were granted a preliminary injunction by Malabon City Regional Trial Court (RTC) Judge Zaldy Docena in 2014.

The LLDA elevated the case to the CA.

In a separate telephone interview, lawyer John Andrew de Guzman, LLDA chief legal counsel, said such was an “environmental case” and, citing Administrative Matter (AM) No. 09-6-8, said no court therefore could issue a temporary restraining order against “lawful actions of government agencies” except for the Supreme Court.

The CA, on March 27, 2017, declared the RTC’s injunction “null and void,” but reversed its decision in October.

“A second hard look at the records shows that indeed (the AM) was not invoked below. How then could the court (Malabon City RTC) be expected to rectify its mistake, if any, when in the first place, the argument was not raised before the said court, but only to this court (CA)?” read a copy of the decision signed by Associate Justice Normandie B. Pizarro.

It added: “Our March 27, 2017, decision is reversed and set aside … The assailed RTC issuances stand.” 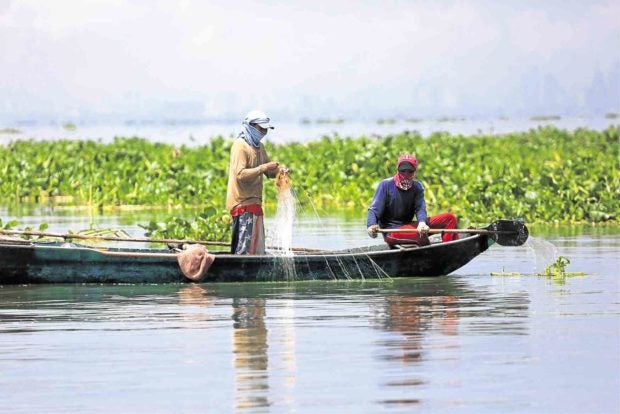 President Duterte has promised to clear Laguna de Bay of illegal fishing structures to give small
fishermen access to the lake’s resources.—REM ZAMORA

In a statement e-mailed to the Inquirer on Friday, Jaime Medina, LLDA general manager, expressed his “sadness” as he “considered it a setback in the government’s campaign to rid the Laguna [de Bay] of illegal fishpens and other aquaculture structures.”

The rehabilitation of the Laguna de Bay was a major environmental program of the Duterte administration. The President, during his first State of the Nation Address in July 2016, promised that he would return the lake to small fishermen.

The LLDA, in late 2016, began its crackdown on illegal fishpens in an effort to reduce the area of aquaculture within the lake’s natural carrying capacity of 9,200 ha.

The agency has since demolished illegal structures in 1,600 ha and has vowed to clear 3,000 ha more until the end of the year.

De Guzman said the LLDA, through the Office of the Solicitor General, on Friday appealed the CA ruling.