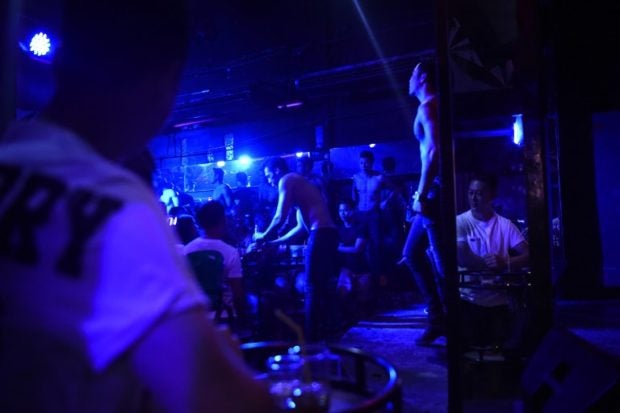 This photograph taken on October 7, 2017 shows Thai male dancers on stage as Chinese tourists watch at ZAG bar in Thailand’s southern tourist destination of Phuket. Bathed in a pink spotlight, the cabaret singer at Phuket’s ‘ZAG’ bar lip-syncs the top notes of a popular Mandarin love song, delighting the crowd of gay Chinese tourists who have escaped judgement at home for sexual freedom in Thailand. / AFP PHOTO / LILLIAN SUWANRUMPHA

Phuket, Thailand — Bathed in a pink spotlight, the cabaret singer at Phuket’s ZAG bar lip-syncs the top notes of a popular Mandarin love song, delighting the crowd of gay Chinese tourists who have escaped judgement at home for sexual freedom in Thailand.

While the song, “The Moon Represents My Heart”, is a hit with the patrons, the transgender singer is just the warm up act.

“We’re waiting for the go-go boys!” says one Chinese reveler at ZAG, one of several clubs squeezed into “Paradise Complex”—
the epicenter of the raucous gay nightlife scene on the party-hard island.

With an estimated LGBTQ population of 70 million, China has the world’s third-largest “pink market” after Europe and the United States.

Yet in China being openly gay is still fraught with difficulties.

Dressing a certain way or public displays of affection can draw stares and lead to family turmoil. Some Chinese parents have even brought gay children to “conversion” clinics for treatment.

Homeosexuality was classified as a mental illness in China until 2001 and a crime until 1997, and authorities have arrested gay rights activists.

That makes Thailand, renowned for its more permissive attitude towards sexuality, an alluring holiday option for gay Chinese looking to cut loose away from family pressures and censorious eyes.

While LGBTQ Thais often still face discrimination in the workplace, the kingdom’s gay party scene is famously loud and proud, known for late-night clubbing and cabaret shows in Bangkok and along its coastal resorts.

“Every night, around half our customers are from China. They used to come in the past, but this year suddenly there were a lot, so we added Chinese songs,” Bon Nadech, the owner of ZAG bar told AFP.

“Chinese tourists are great customers. They’re polite and curious about Thailand,” said a waiter at the nearby MO2 club.
Chinese travel companies are also crowding in to tap the market.

The relaxed atmosphere offers a rush of liberation for those who make the trip.

“I have a lot of friends who don’t feel safe in China and feel they need to hide. In Thailand they don’t have to worry,” said Ji Chengfeng, a 37-year-old entrepreneur from Beijing, who was visiting Phuket on one of his frequent holidays in the kingdom.

China sends more tourists to Thailand than any other country, with cheap air links and no visa requirements funneling visitors to the kingdom.

Thailand has already welcomed 6.6 million Chinese tourists in 2017 — up from a total of 2.7 million five years ago — bringing a flood of cash into the key sector.

In comparison, less than 700,000 Americans and a little over 500,000 French citizens visited Thailand so far this year.

The economic potential of LGBTQ travelers in particular is increasingly catching the eyes of tourist operators worldwide.

Many are not parents and therefore have a greater disposable income, plus are better able to travel outside peak holiday periods.

In recent years, on the heels of gay marriage court rulings, tourist boards in the more permissive corners of the world are promoting their countries as same-sex wedding and honeymoon destinations.

In 2013, the Tourism Authority of Thailand’s office in New York launched its campaign, “Go Thai Be Free”, to actively welcome LGBTQ travelers.

While same-sex marriage is not officially recognized under Thai law, it is a widely accepted practice and Buddhist monks often preside over such ceremonies.

But it remains strictly illegal in China, where a court last year ruled against two men seeking to marry.

“We get more business if we offer tours in Mandarin,” said Lalani of Phuket Sunshine Tours, who gave her first name because she was not authorized to speak with media.

As the night wears on at ZAG, the atmosphere becomes increasingly freewheeling, with lesbian, bisexual, transgender, gay and straight partygoers downing shots together and posing for photos with the bare-chested go-go boys.

“I want to find some way to live here. It’s so fun and open. Men can hold hands on the street and no one will care,” one young web developer from Shanghai told AFP, declining to give his name to protect his identity.

“In China if you do that people will make a big deal out of it. They will take photos of you,” he said, before leaping onto stage for a dance.