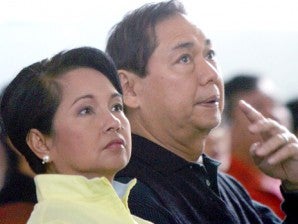 The Arroyos’ lawyer Ferdinand Topacio said the charges would be filed as soon as possible, saying De Lima disrespected the Supreme Court by refusing to recognize the temporary restraining order on the watch list against the Arroyos.

“Walang konsensiya (She doesn’t have a conscience).  Sabi nga ni Fr. [Joaquin]  Bernas (As Fr. Bernas said), this is no longer injustice, this is already cruelty,” Arroyo said.

“We will file charges against Secretary de Lima and immigration officers, those who did not allow us,” he said.

He made the statement shortly after his wife, the former President, was wheeled back to a waiting ambulance at 9:30 p.m., just a little over an hour since she arrived at the Ninoy Aquino International Airport to attempt an 8:55 p.m. flight to Hong Kong.

“Biro niyo she was subjected to the stress na pumunta siya dito thinking makakapagpagamot, ngunit ’di pa siya pinayagan umalis. She was very stoic pero bakas po sa mukha ang pagkadismaya (She was subjected to the stress of coming here at the airport, thinking that she could get medical treatment abroad but still she was not allowed to leave.  She was very stoic but dismay could be seen on her face),” Topacio told reporters.