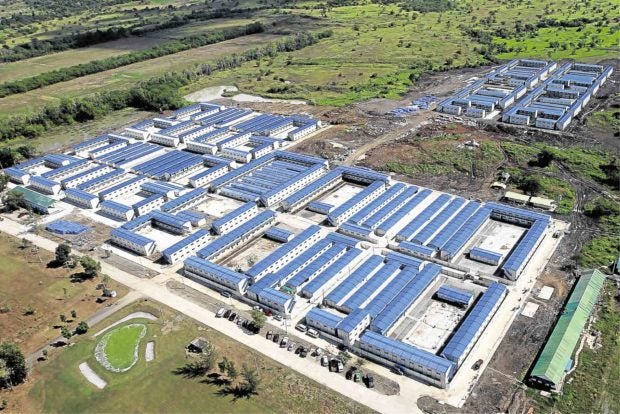 FIRST, BIGGEST With its 10,000-bed capacity, the DATRC is the government’s biggest rehab center. —INQUIRER PHOTO

Malacañang is open to the proposal of Sen. Vicente Sotto III to expand the purpose of the government-run mega drug rehabilitation facility in Nueva Ecija, which had been criticized as a ‘‘mistake” and ‘‘impractical.”

Presidential spokesperson Harry Roque said the Palace welcomed the suggestion to turn part of the 10,000-bed center into a training facility for antidrug agents, which had not been intended as a permanent structure.

Sotto had suggested that the center, aside from being a rehabilitation facility for drug dependents, could also be used as an extension of the Philippine Drug Enforcement Agency’s (PDEA) academy.

The center is not running at full capacity.

“We welcome the suggestion of Senator Vicente Sotto III on the mega drug rehabilitation and treatment center in Fort Magsaysay, Nueva Ecija,” Roque said in a statement.

“If you would recall, the 10,000-bed mega-facility was built for the recovery and treatment of drug addicts in the country. However, from the beginning, we, particularly our health officials, do not envision this to be a permanent structure,” he added.

According to him, the government plans to turn over the facility to the military or other government agencies after the illegal drug problem is resolved.

It is not known when the problem would be resolved, though, given that President Duterte himself said he might not be able to end it during his term.

He had promised during the election campaign to lick the problem in three to six months, but had since said he was unaware of the extent of the drug trade when he set this timeframe.

The suggestion to expand the purpose of the drug rehabilitation facility, funded by a donation from a Chinese businessman, came after former Dangerous Drugs Board (DDB) chief Dionisio Santiago commented that it was impractical and a mistake.

Santiago had said the government could have focused on community-based rehabilitation programs.

Mr. Duterte asked Santiago to resign from the DDB after the latter’s comments. The President said he had been offended that Santiago talked to the media about his views instead of first discussing these with him.

Sotto said the facility could still be put to optimum use.

‘‘Aside from being just a drug rehab facility, it can be utilized as the country’s mega drug enforcement academy,” Sotto said. PDEA, tasked by Mr. Duterte to spearhead the war against drugs following criticisms of the way the Philippine National Police handled the campaign, could oversee the facility as an extension of the PDEA academy, he said.

Sotto said Mr. Duterte could also invite guest instructors from countries like China, the United States and Australia to make it a world class training facility.