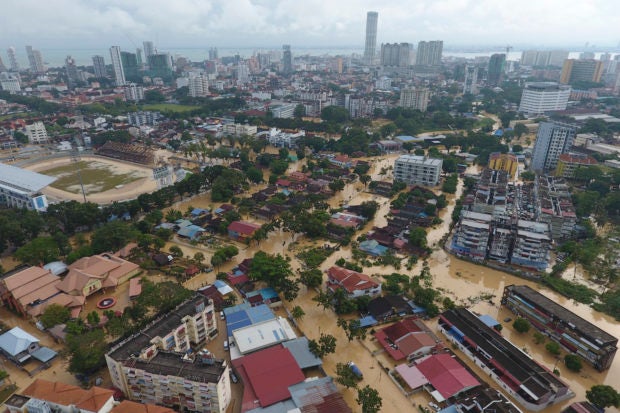 “Even if the flood mitigation works are completed, with that level of storm and intensity, you cannot prevent that,” Mr Lim told reporters.

Officials say over RM500 million (S$161 million, US$118 million) has been spent from the state budget on flood mitigation projects in Penang since 2008, with most works focused on smaller-scale projects. Another RM150 million worth of flood prevention measures – under the federal budget for 2016 – will only be completed by 2021.

“We were hit with a triple whammy. We had record levels of rainfall, winds… There was also record rainfall in Kedah which also caused floods in (mainland) Penang,” said Mr Lim.

Penang, which has been governed by the Democratic Action Party (DAP), a federal opposition party, since 2008, has experienced 119 incidents of flash flooding since 2013. The worst-hit areas last weekend were on Penang’s mainland.

Funding seems to be a contentious issue, with the Penang government claiming the federal government, under the ruling Barisan Nasional coalition, has been holding back spending since 2008.

Natural Resources and Environment Minister Wan Junaidi Tuanku Jaafar said that RM1.04 billion has been spent by the federal government on flood mitigation projects in Penang since 2006. This is less than half the RM2.57 billion approved to be spent by 2020.

On Tuesday, Prime Minister Najib Razak said RM150 million has been approved for disbursement but Mr Lim clarified that this sum was from last year’s allocation, adding that no new funds have been channelled by the federal government for 2018 onwards. Penang state has set aside another RM150 million for flood mitigation projects this year.

River works, such as reinforcing bunds, are another flood prevention measure. However, these fall under the federal government’s purview.

“The most effective (flood prevention) is a barrage like what Singapore has, but it’s a very costly project,” Mr Chow said.

Fingers have also been pointed at the country’s Meteorological Department for not issuing storm warnings early enough. The agency said, however, that it warned of heavy rainfall as early as Nov 1, three days before the storm hit. Mr Lim said the highest-level warning, a red alert, was only sounded at 9:30 pm last Saturday, when the storm had already begun.

“If we were given earlier warning, we could have moved our resources to those hot spots,” he told reporters. He added, however, that infrastructure alone is not enough. “We can have the best mitigation measures in the world, but you are no match for mother nature.”