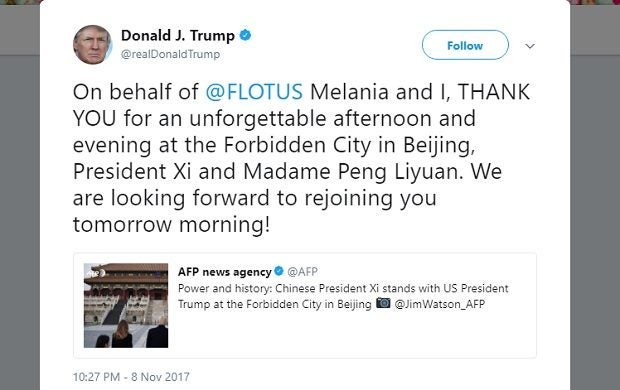 BEIJING, China — US President Donald Trump broke through China’s “Great Firewall” on Wednesday as he posted messages on Twitter during his visit to the country, which has banned the website.

Trump posted an initial message to thank President Xi Jinping for his warm welcome — even though the social media platform is not supposed to be visible in the country. He then tweeted a warning against North Korea.

But Trump was expected to use sophisticated technology available to the US president to circumvent the so-called Great Firewall, with US officials saying they had brought “gear” to “make it happen”.

The US president tweeted an AFP photo of his visit to the Forbidden City, where Xi and his wife treated Trump and First Lady Melania Trump to tea and watched an opera performance.

“On behalf of @FLOTUS Melania and I, THANK YOU for an unforgettable afternoon and evening at the Forbidden City in Beijing, President Xi and Madame Peng Liyuan. We are looking forward to rejoining you tomorrow morning!” Trump wrote.

Trump appears to have used something other than his smartphone to post the message: It had the tag of “Twitter Web Client” instead of “Twitter for iPhone” as in his previous tweets.

In another post, Trump wrote that he was “looking forward to a full day of meetings with President Xi and our delegations tomorrow. THANK YOU for the beautiful welcome China! @FLOTUS Melania and I will never forget it!”

Trump has used Twitter to both praise and scold Xi, especially over his handling of North Korea, which will be the focus of their talks on Thursday along with China’s yawning trade surplus with the United States.

Hours after calling North Korea a “cruel dictatorship” during a speech to South Korea’s parliament, Trump wrote that Pyongyang “has interpreted America’s past restraint as weakness. This would be a fatal miscalculation. Do not underestimate us. AND DO NOT TRY US.”

But web users can circumvent the firewall if they download a virtual private network (VPN) — software that allows people to surf the internet as if they were using a server in another country.

Foreign visitors can also access banned websites with their phones if they are in roaming mode — but only because the authorities currently allow it, according to experts.

China has its own Twitter-like website, Weibo, which is closely monitored by the authorities.

Weibo was ablaze Wednesday with comments about what Trump would do if he could not use his most cherished form of communication.

Since Trump’s election in 2016, critics among Chinese internet users have mockingly described American governance as “rule by Twitter.”

Some commenters feigned ignorance about the verboten site.

Others appeared to be asking for explanations about Twitter in earnest, while still others called on Trump to create a Weibo account.

“In the three days that Trump’s off Twitter, someone else will surely seize the throne,” commented a user on Zhihu, a question-and-answer platform akin to Quora. /cbb