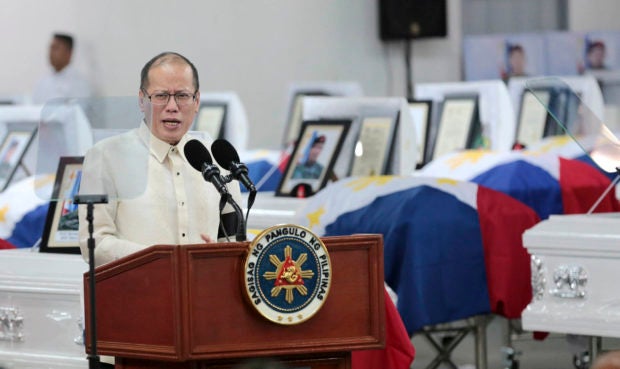 The Office of the Ombudsman on Wednesday filed criminal charges in the Sandiganbayan against former President Benigno Aquino III for mishandling a counterterrorism operation that resulted in the deaths of 44 police commandos in Mamasapano, Maguindanao province, on Jan. 25, 2015.

Ombudsman prosecutors  charged Aquino with usurpation of authority, as well as graft and corruption, following a preliminary investigation.

The Ombudsman said Aquino allowed suspended PNP Director General Alan Purisima to be involved in the planning and execution of “Oplan Exodus” – the police operation to get Marwan, the Malaysian deputy Amin Baco, alias Jihad, and their Filipino associate, Basit Usman – and kept the interior secretary and the PNP officer in charge out of the loop.

At the time of the planning and execution of Oplan Exodus, Purisima was suspended as PNP chief by the Ombudsman pending investigation of an allegedly irregular  firearms license delivery deal.

Prosecutors recommended bail of P30,000 for the graft charge and P10,000 for the usurpation charge – double the P20,000 total bail posted by Purisima when he was charged  in January.

Aquino’s colleagues in the Liberal Party (LP) said the former President could ably defend himself.

Sen. Bam Aquino said his cousin had always been open about his role in the Mamasapano debacle.

“That is why I am confident he would face the case with full courage and honesty,” the senator said.

Senate Minority Leader Franklin Drilon told reporters the filing of charges against Aquino had been expected, as the Ombudsman earlier issued a resolution that found basis to bring charges against the former President.

Offenses against the people

Bayan Muna Rep. Carlos Isagani Zarate said that while his group welcomed the filing of charges against Aquino, the indictment did “not reflect the gravity of their offenses against the people in the Mamasapano debacle.”

But Ifugao Rep. Teddy Baguilat Jr. of the LP said the former ruling coalition believed the charges were “legally infirm” and Aquino’s actions did not violate the law.

Aquino also allegedly convinced Purisima to disobey Special Order No. 9851, issued by the then PNP officer in charge (OIC), Deputy Director General Leonardo Espina, directing the suspended police chief to “cease and desist from performing the duties and functions of [his] office,” it said.

Aquino instead used Purisima’s services in the counterterrorism operation, while giving instructions and receiving updates and recommendations from the SAF commander, Director Getulio Napeñas.

Aquino effectively “eased out” Espina and then Interior Secretary Manuel Roxas II from the operation despite “knowing fully well” that the Ombudsman and the PNP OIC had ordered Purisima to stop performing his functions.

Prosecutors stressed “it was Espina who had the authority to oversee the preparation for and conduct of Oplan Exodus.”

The charge sheet for the usurpation case stated that Aquino allowed Purisima to “exercise the functions of the chief of the PNP.”

It said Aquino did this by allowing Purisima to attend a Jan. 9, 2015, meeting at Bahay Pangarap, the President’s official residence inside the Malacañang compound.

Aquino, it said, instructed Purisima to coordinate with the Armed Forces of the Philippines and “communicating exclusively” with him during the heat of the action on Jan. 25.

Prosecutors construed Aquino’s actions to mean he allowed Purisima to act “under pretense of official position” despite being suspended by the Ombudsman.

Supt. Hendrix Mangaldan, formerly of the SAF, is one of the prosecution witnesses, according to the charge sheets signed by Assistant Special Prosecutor Reza M. Casila-Deyarunan and approved by Ombudsman Conchita Carpio Morales on Nov. 3.

Similar cases have been pending in the Sandiganbayan against Purisima and Napeñas since Jan. 24.

Their cases have yet to reach the trial stage because they have brought a motion to dismiss and a motion for judicial determination of probable cause.

Aquino’s case did not reach the court right away because the relatives of the slain SAF commandos could file their complaint only in July last year after he finished his term.

The complainants wanted the Ombudsman to indict Aquino for reckless imprudence resulting in multiple homicide, implying that the former President himself should be accountable for the deaths of the police commandos at the hands of the  rebels.

But the Ombudsman found only probable cause to pursue criminal charges related to the behind-the-scenes irregularities. –With reports from Christine O. Avendaño and the wires