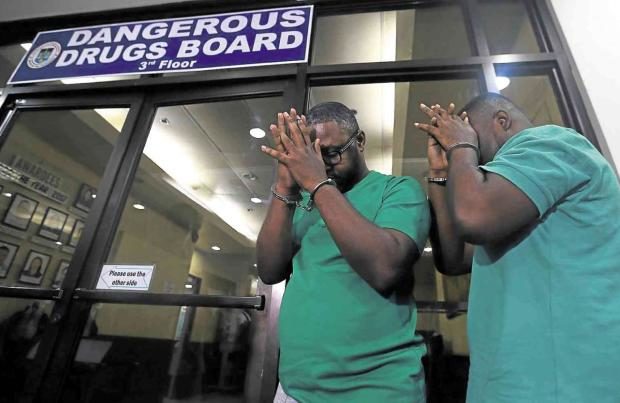 Solomon Anochiwa (left) and Desmond Ozoma, who are suspected members of an African drug syndicate, are presented at the PDEA headquarters in Quezon City after their arrest in Cavite province on Wednesday, Nov. 8, 2017. (Photo by LYN RILLON / Philippine Daily Inquirer)

The suspects, Desmond Chima Ozoma, 35, and Solomon Lewi Anochiwa, 34, were arrested in a drug bust along Centennial Road in Kawit town, Cavite, at 12:15 a.m. on Wednesday.

In a statement, Christian Frivaldo, PDEA Bicol regional director, said their operatives seized from the Nigerians three plastic bags containing suspected shabu weighing about a kilogram and with a street value of P6 million.

Their arrest came after four drug couriers from Metro Manila were arrested in Naga City on Saturday night for carrying a kilogram of shabu identified the Nigerians as the sources of the drugs.

One of the suspects, Olivia Encinas, revealed to the PDEA that the illegal drugs came from the Nigerians. Anochiwa lives in a subdivision in Kawit while Ozoma lives in Parañaque City.

Frivaldo said PDEA’s surveillance operation established that the suspects were high-value targets and included in the government watch list as drug suppliers in Southern Luzon.

“They are trying to take the market here … [but] we [will] make sure that they will not gain ground here,” Frivaldo said in a text message.

The PDEA in Camarines Sur province said the four drug couriers nabbed in Naga had been delivering drugs to some areas in the city and as far as the Visayas.

The suspects had been meeting with their buyers in Ragay town, Camarines Sur, it said.

Frivaldo said the campaign against illegal drugs would continue despite PDEA’s limited number of personnel and funds.

Earlier, President Rodrigo Duterte removed from the Philippine National Police the task of leading the government’s drug war due to alleged abuses and human rights violations.

The President tapped the PDEA as the lead agency in carrying out the campaign against illegal drugs. /kga /pdi