With Asean meet in Metro Manila, spend a 5-day breather in these destinations 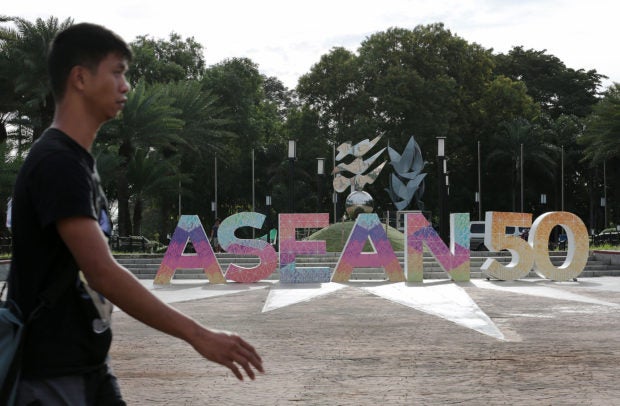 A pedestrian walks pass a colorful ASEAN signage at the Cultural Center of the Philippines (CPP) complex in Pasay City as the country prepares to host the leaders summit next week.
INQUIRER PHOTO / GRIG C. MONTEGRANDE

Metro Manila workers and residents will have a five-day breather as world leaders converge on Manila next week for the Association of Southeast Asian Nations (Asean) Summit.

With time to spare and, hopefully, with their bonuses in, they can head off to vacation destinations near and far for that much needed break.

Southern, central and northern Luzon offer a variety of activities to do and places to see, without having to burn pockets or spend much time on the road.

In Cavite province, tourist destinations and accommodations are looking forward to the rush of vacationers, said Lani Diesta, tourism officer of Tagaytay City.

Tagaytay’s “tourism strip,” the 28-kilometer stretch from the city rotunda to the boundary of Nasugbu, Batangas province, is dotted with coffee shops, hotels, spas, art museums and restaurants.

Among the best known places to relax in is Nurture Wellness Village. The facility offers accommodation and a 6,000-square-meter organic farm of medicinal plants and vegetables.

The provincial government promotes heritage tours that remind people of the Philippine Revolution. There are eight historical museums, the most popular of which is Aguinaldo Shrine in Kawit town, a few minutes’ ride from the Cavite Expressway.

Guides also offer a walking tour to the traditional “pandayan” or bolo-making street.

In Carmona town, there is paragliding in Barangay Lantik. This activity may be your best chance to unleash the thrill-seeker in you since paragliding is available only from November to April.

Batangas is where you’ll find a quick dose of that “vitamin sea”—even in a “ber” month. The town of Mabini, known for its diving spots, has rebuilt itself quickly since the series of earthquakes in April. The beaches of Laiya in San Juan town have been the province’s major attractions.

But if you prefer to cuddle in breezy weather, visit Lipa City, a two-to three-hour travel from Manila. Find the best “lomi” or “goto” at Lomi King, Gotohan sa Barangay or Aling Tessie’s.

The Farm at San Benito in Barangay Tipakan is a “holistic wellness destination” that offers detoxification procedures, yoga retreats and complete amenities for a rejuvenating five-day break.

Rizal province is a next-door destination for Metro Manila residents, especially nature-trippers. The town of Tanay offers outdoor activities, such as spelunking at Calinawan Cave or swimming in Daranak Falls. 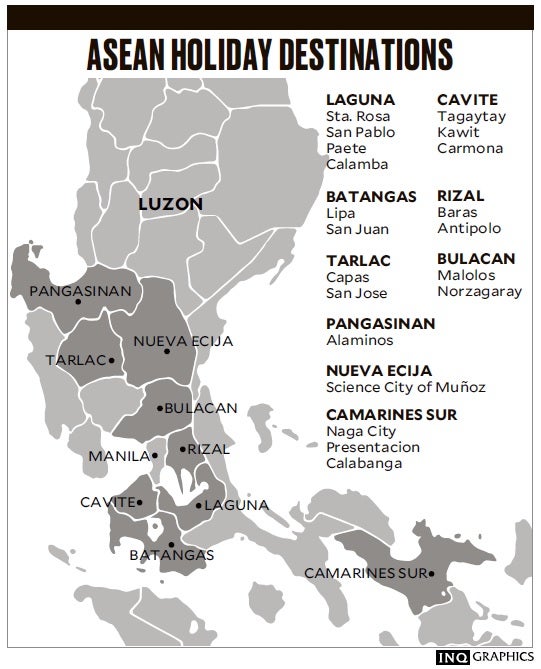 Close by, at Baras town, is Masungi Georeserve, a conservation area with a three to four-hour full round trail amid rock formations. The facility includes a hanging bridge, rope courses and the “sapot,” a large weblike platform on which to view the Laguna de Bay.

Antipolo City has its iconic cathedral at the Shrine of Our Lady of Peace and Good Voyage. Spend the night in one of the hotels and inns overlooking Metro Manila and try not to miss Pinto Art Museum, a 1.2-hectare gallery of modern and contemporary art.

Laguna province is known for its day-tour destinations, such as the world-class theme park Enchanted Kingdom in Santa Rosa City. Nuvali area offers activities, such as trail biking, horseback riding and koi feeding.

Further south is a nature trip on bamboo rafts or “balsa” in Pandin Lake, one of the seven interconnected lakes of San Pablo City. There are a number of natural falls to choose from in Majayjay, Cavinti, Pagsanjan and Pangil towns.

Paete is known for its traditional woodcarving. Spend a day in this town and bring home cheap but beautifully handcrafted Christmas decorations.

In Calamba City and Los Baños town, let the hot, natural springs warm you up this month. But try not to lose patience over the heavy traffic.

Wake up to majestic Mount Makiling or stroll the panoramic Pili drive that leads to the International Rice Research Institute.

PhilRice exhibits will teach tourists about the different varieties of rice. Its five-hectare “Future Rice Farm” is also a major attraction.

Nine kilometers away is CLSU, proclaimed in 2001 as the “Agro-tourism Site for Luzon.” It has an agricultural museum that houses rice and vegetable planting implements, indigenous utensils, and hunting and fishing tools.

In Bulacan province, Angat Dam in Norzagaray town was opened as an ecotourism site in 2016, providing a view of the Sierra Madre mountains, the zigzag road and the Bitbit River and bridge at the foot of the dam.

In City of Malolos are “Kalutong Bulakenyo” restaurants, such as Bistro Malolenyo and Bahay Tisa, whose menus feature the favorite cuisine of revolutionary heroes.

In Tarlac province, visitors can go to The Farmhouse in Capas town, an agritourism farm that offers accommodation facilities. Guests can take part in farm work, such as planting rice, milking cows and feeding hogs or touring the farm on a carabao-drawn cart. Food is served in a farm-to-table restaurant.

The adventurous can trek to Mount Pinatubo via Barangay Santa Juliana, 22 km from the town center of Capas.

Spiritually inclined families can visit Monasterio de Tarlac in San Jose town. A 9.14-meter statue of the Risen Christ is found in the 29-hectare pilgrimage park.

An hour away by plane from Metro Manila is the Bicol region, where unspoiled beaches and nature greet visitors.

The old churches in Milaor, Bombon, Calabanga and Libmanan towns are also popular to tourists.

Aguirangan Island in Presentacion town is perfect for the adventurous type. Tourists can enjoy the white sand beaches of Caramoan and Atulayan Island in Sagñay town.