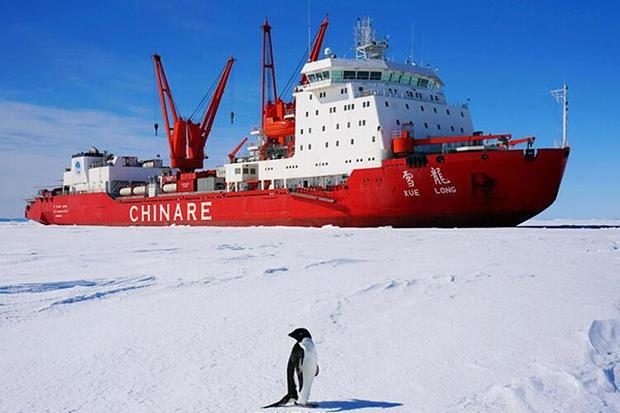 A penguin is seen in front of Chinese icebreaker Xuelong, or Snow Dragon, docked at an ice cover area of the South Pole. The icebreaker is on China’s 31st scientific expedition to Antarctica. (Photo from official Weibo of CCTV via China Daily)

China’s icebreaker Xuelong will weigh anchor in Shanghai and head for the Antarctic on Wednesday.

The ship’s captain, Zhu Bing, said the vessel will first travel to the site of a planned new station before making a routine stop at Zhongshan Station. The ship is scheduled to be back in Shanghai in mid-April.

Carrying 550 metric tons of materials and more than 200 people, one of the vessel’s main tasks is to prepare for the building of another comprehensive research station.

Once completed, the new station – located on Inexpressible Island in the Ross Sea’s Terra Nova Bay – will be the country’s third year-round station in the Antarctic and the first to be situated on the boundary of the Pacific Ocean.

The other two stations, Changcheng Station and Zhongshan Station, were built in the 1980s. China has two seasonal inland stations, Kunlun and Taishan, in the Antarctica.

“This time around, we will build a 206-square-meter temporary base, which includes rooms for workers and a dock for large engineering machines, to facilitate future construction work,” said Zhang Tijun of the Polar Research Institute of China, who is assistant expedition leader.

Sun Bo, the deputy director of the institute, said construction of the station, which will meet international criteria for environmental protection, will be completed as early as 2022.

Sun, who visited the location last year, added that the biodiversity is very rich, which is extremely valuable for scientific research.

The world’s largest protected marine area, covering 1.57 million square kilometres, was established in the Ross Sea by the Commission for the Conservation of Antarctic Marine Living Resources in 2016, where fishing is prohibited for 35 years.

Yang Huigen, the chief scientist of the expedition, said another objective of the expedition is to build a network to monitor various environmental indexes, including Sun-Earth interaction, atmospheric changes and sea-ice dynamics, so as to provide scientific data for studies on climate change and Antarctic ecology.

“The network will provide consistent and standardised data that will allow us to learn about the long-term changes happening on the Antarctic continent,” said Zhang Beichen, director of the institute’s information center.