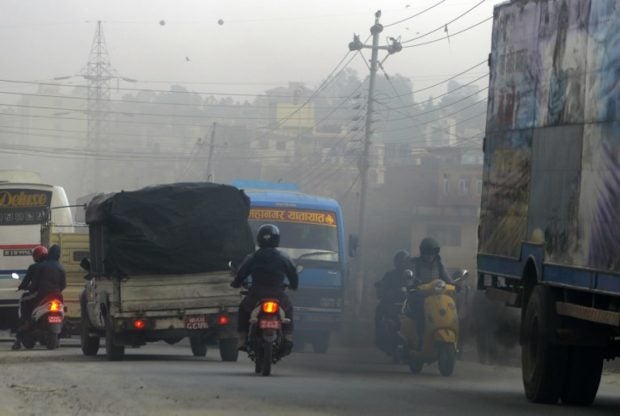 In this photograph taken on March 2, 2017, motorbike riders travel on a polluted road in Kathmandu. / AFP PHOTO / PRAKASH MATHEMA

As one of the countries most vulnerable to climate change, Nepal will draw the attention of international community during the global climate change conference, also called Conference of Parties (COP23), that kicked off in Bonn, Germany, on Monday. The Nepali delegation led by Minister for Population and Environment Mithila Chaudhary will take part in several events, sharing Nepal’s concerns on the effects of climate change that the country confronts.

The twenty-third session of the COP to the United Nations Framework Convention on Climate Change (UNFCC) is a global event which brings together policy makers, delegates, scientists, lobbyists and private sectors.

Nepal has prepared a detailed status paper especially for the COP23. It will be sharing its climate change experiences at the event, according to Bishwo Nath Oli, secretary at the Environment Ministry.

“We have prepared the status report including our experience with climate change over the years and what we expect from the international community,” said Secretary Oli. “The status paper was necessary also for making our participation in the conference effective.”

The document, drafted after a series of consultations with stakeholders and experts, urges implementation of previous agreements especially the Paris Agreement, widely seen as a historic accord that pledges to limit global temperature rise below 2 degrees Celsius.

As a party to the UNFCC, Nepal signed the Paris Agreement in April last year. The Legislature-Parliament ratified the accord in October the same year.

Global leaders converging at the COP23 are expected to push for implementation of the 2015 Paris Agreement by developing guidelines, incorporating various issues like adaptation, emission reduction, transparency of action and support, technology transfer and capacity-building of the poor and highly vulnerable countries like Nepal.

Besides this, the global event is also supposed to finalize the Paris Agreement rule book to be adopted at the COP24 in Poland next year.

In Nepal’s status paper, the country has urged the international community to build momentum and trust among themselves for preparing the rule book guiding implementation of the Paris Accord.

Nepal, besides stressing timely adoption of the rule book and implementation of the accord, has asked for technical and financial support it deserves as a Least Developed Country (LDC).

The status paper incorporates topics such as programs under the Paris Accord, mitigation measures, adaptation, means of implementation, and cross-cutting agendas like climate and gender. Under these areas, the paper enlists Nepal’s experiences and furnishes demands while fighting climate change.

On the fund for climate-vulnerable countries, the status paper reads, “While mitigation is important, adaptation finance must also be prioritized. Green Climate Fund should have more focus on adaptation for LDCs. The Least Developed Countries Fund is important for countries like Nepal; hence, the developed countries should urgently pledge to the Fund and support the actions in LDCs.”

Citing its disasters like recent flooding, Nepal has also requested for separate funding for loss and damage, urging the COP23 to provide space to discuss funding requirements for vulnerable countries as compensation for loss and damage.

Nepal has called for clear pathways to developed country’s contribution to $100 billion per year by 2020, an agreement made during the Paris COP21.

The international access to climate finance has always been difficult for LDCs. The status paper suggests that simplified, easy and direct access of support must be in place so that the LDCs can access the necessary resources for climate actions.

Nepal has also drawn attention of the developed world for support in the field of technology transfer and capacity-building, which has been sluggish so far.

“The Paris Committee on Capacity-building has been established to support countries like Nepal. However, not much progress has been made under this heading. The support mechanism for LDCs must be expedited,” reads the document.