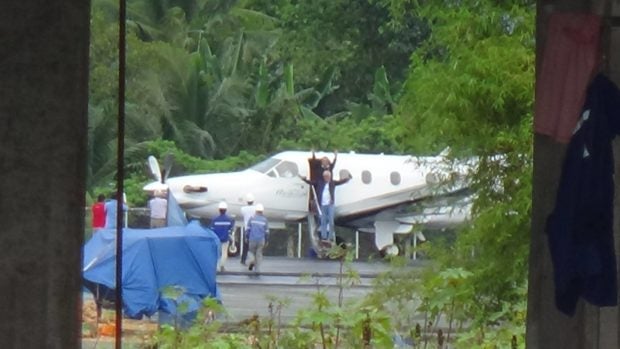 An aircraft lands at the airfield of New Bohol International Airport in Panglao town on Tuesday for a test flight conducted by three secretaries of President Rodrigo Duterte. Leo Udtohan/Inquirer Visayas

PANGLAO, Bohol- A test flight has been carried out by three secretaries of the Duterte administration to evaluate the function of the New Bohol International Airport on the tourist-island on Tuesday.

Secretaries Arthur Tugade of Transportation (DOTr), Ernesto Pernia of National Economic and Development Authority (Neda) Secretary and Leoncio Evasco took a private aircraft from Manila and landed safely at the Bohol International Airport at 11:05 a.m. on Panglao Island at least 18 km from the capital city of Tagbilaran.

The aircraft flew back to Manila on Tuesday afternoon.

Tugade said they planned to start operations at the P7.8-billion facility in June 2018 .

“However, it will be commercially operational in August 2018,” said Tugade. Once it becomes operational, the Tagbilaran Airport, the 11th busiest airport in the country, will immediately be closed.

Tugade said the test flight had successfully proven that the new airport met the standards for civil aviation.

He said the airport will be ready for a sunrise to sunset operation by August next year with day flights of international standard.

The project includes the construction of a 2,000-meter runway with projected expansion to 3,000 meters, other airside facilities such as two taxiways and apron, and an 8,361-square-meter passenger terminal building.

Other buildings now being constructed under the current project phase are the control tower, administration building, fire station and ancillary buildings.

The modern airport in Panglao can accommodate large aircrafts for international flights.