Trump due in Seoul amid North Korea tensions 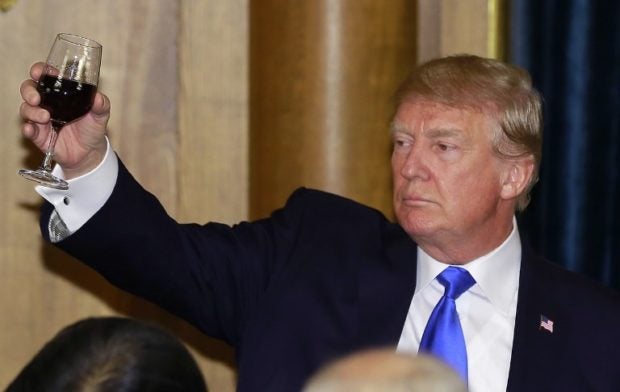 US President Donald Trump toasts after delivers a speech at the opening of a welcome dinner hosted by Abe at Akasaka Palace in Tokyo on November 6, 2017. Trump described North Korea’s nuclear missile program as a ‘threat’ to the world on a trip to Asia dominated by the crisis.  AFP

SEOUL, South Korea — Donald Trump’s marathon Asia tour moves on Tuesday to South Korea, another key ally in the struggle with nuclear-armed North Korea, but one with deep reservations about the US president’s strategy for dealing with the crisis.

As tensions over Pyongyang’s weapons programme have soared, the US president has traded personal insults and threats of war with North Korean leader Kim Jong-Un, but his next stop, Seoul — and its 10 million inhabitants — would be on the front line of any conflict.

“Getting ready to leave for South Korea and meetings with President Moon, a fine gentleman,” Trump tweeted early Tuesday, adding: “We will figure it all out!”

Trump flies in from Japan after securing Tokyo’s full support for Washington’s stance that “all options are on the table” regarding North Korea, and declaring its nuclear ambitions “a threat to the civilised world and international peace and stability”.

He enjoyed three days of near-bromance with Prime Minister Shinzo Abe, calling him “wonderful” after a round of golf and describing US-Japan ties as “really extraordinary”.

In Seoul, Trump’s relationship with South Korean President Moon Jae-In is noticeably cooler, stoking concerns about the decades-old alliance and fears of being sidelined by the US in favour of Tokyo.

At the same time, Moon is mindful that much of his capital is within range of the North’s artillery, and has demanded that no military action take place on the peninsula without the South’s prior consent.

Trump has labelled Moon’s pro-engagement approach to North Korea as “appeasement” on Twitter, a comment that did not go down well in Seoul’s presidential Blue House.

South Korea will roll out the red carpet for Trump as it seeks messages of assurance about the alliance and US resolve.

Citizens views are mixed, with both “No Trump” and “Welcome President Trump” demonstrations taking place in downtown Seoul since the weekend, sometimes only a few blocks apart.

North Korea — which carried out by far its most powerful nuclear test to date in September — itself welcomed Trump to the region with a rhetorical volley via the ruling party newspaper Rodong Sinmun, warning a “spiritually instable” president against making “reckless remarks”.

In South Korea, Trump’s first stop will be Camp Humphreys, where US forces stationed in the country have moved their headquarters from downtown Seoul.

Later he will have a summit with Moon at the Blue House, followed by a lavish dinner with live concerts by both Korean traditional musicians and K-pop artists.

On Wednesday, Trump will speak to South Korean MPs but his visit will not include a trip to the Demilitarized Zone dividing the Korean peninsula, with the administration downplaying the destination as “a little bit of a cliche”.

Some observers have fretted that a gaffe by a president given to off-the-cuff remarks could send tensions rising on the peninsula. /cbb

“If Trump says anything that can provoke North Korea, it could send military tensions soaring again,” said professor Koo Kab-Woo from the University of North Korean Studies in Seoul. /cbb