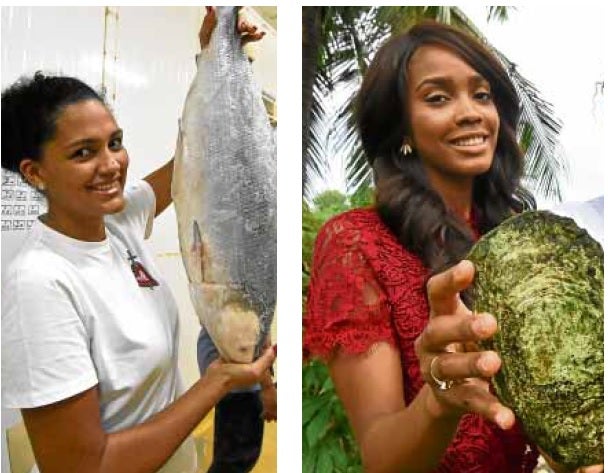 DAGUPAN CITY — With 2017 Miss Earth Angola Ermelinda Matos in tow, former Angolan beauty queen Stiviandra Oliveira took a four-hour trip from Metro Manila to this city on Sunday to satisfy her craving for “bangus” (milkfish), a product that has made this city famous.

Oliveira, 29, was Miss Angola in 2006. She competed in the Miss World pageant that year and won as Miss World Africa.

Matos, 23, was among the 16 semifinalists in the 2017 Miss Earth competition in the SM Mall of Asia.

“I like this place. I like the environment. I like nature because I grew up in a farm with big mountains and where people worked a lot,” Oliveira said of the 22-hectare NIFTDC compound dotted by large fish breeding tanks and ponds and coconut trees.

Oliveira was also here to discuss the possibility of transferring aquaculture technology in Angola.

“I want to go into aquaculture because I believe it’s the future. You don’t have to risk your life in the sea,” she said.

Oliveira said she hurt her back and right leg during a fishing trip three weeks ago.

Her first visit to this city was arranged by officials of the Angolan Embassy in Makati City, who helped her find an aquaculture expert.

On Sunday, Oliveira showed Matos and the other Angolans the different NIFTDC facilities, including a shrimp farm. They also had a short visit to the fish cemetery and offered flowers to sea mammals buried there.

Oliveira was fascinated by the fish processing plant, where bangus and other fish species were frozen, deboned and packed.

“They have no processing plant yet in Angola and she wanted to operate one,” said Rosario, who went to Angola in May on Oliveira’s invitation.

According to Rosario, Angola has an abundant supply of fish, but these are all caught from the wild. Angola has a long coastline facing the South Atlantic Ocean.

“We need a lot of help and I think the Philippines is a good place [where to seek help] because we have the same weather and the same fish species,” Oliveira said.

She said: “The next step is to go into aquaculture, like ‘tilapia,’ shrimp and even bangus. In two years, I hope everything will already be in place.” —Gabriel Cardinoza