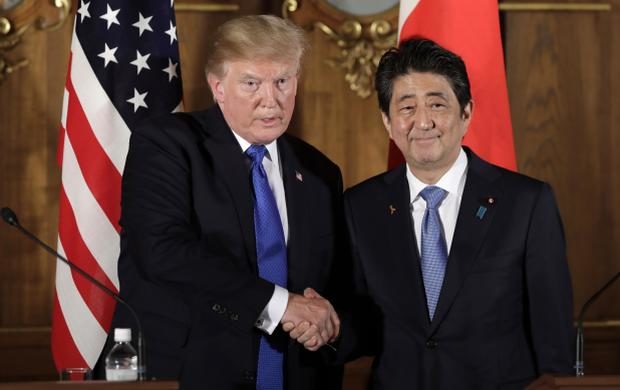 President Donald Trump (left) shakes hands with Japanese Prime Minister Shinzo Abe during a joint news conference at the Akasaka Palace, Monday, Nov. 6, 2017, in Tokyo. Trump is on a five-country trip through Asia traveling to Japan, South Korea, China, Vietnam and the Philippines. (Pool photo by KIYOSHI OTA via AP)

TOKYO — President Donald Trump on Monday refused to rule out eventual military action against North Korea and declared that the United States “will not stand” for Pyongyang menacing America or its allies.

In his first stop of an extended trip in Asia, Trump stood with Japanese Prime Minister Shinzo Abe at a news conference and suggested the United States will arm Japan, much as the United States has done with allies in the Middle East like Saudi Arabia.

He did not deny reports that he has expressed frustration that Japan did not shoot down a ballistic missile North Korea recently fired over its territory.

“He will shoot ’em out of the sky when he completes the purchase of lots of additional military equipment from the United States,” Trump said of Abe. “He will easily shoot them out of the sky.”

Japan, under its war-renouncing Constitution, can shoot down a missile only when it is aimed at the country or in case debris are falling on to its territory.

Some hawkish members of Abe’s Liberal Democratic Party say that it may be possible to shoot down a missile headed toward Guam in case it causes existential threat to the US as Japan’s ally, but experts say that is questionable.

Trump’s trip abroad comes amid dismal ratings among voters for the first-time president and questions about whether he can handle the nuclear standoff with North Korea.

Standing in an Asia capital in range of North Korea’s missiles, Trump defended his fiery language, declaring Pyongyang “a threat to the civilized world.”

“Some people say my rhetoric is very strong but look what has happened with very weak rhetoric in the last 25 years,” said Trump with Abe at the news conference.

Abe, who has taken a more hawkish view on North Korea than some of his predecessors, agreed with Trump’s assessment that “all options are on the table” when dealing with Kim Jong Un and announced new sanctions against several dozen North Korea individuals.

Japan is already seeking money to purchase upgraded SM3 interceptors with greater accuracy and range, as well as other advanced missile defense systems such as land-based Aegis Ashore interceptors or the Terminal High-Altitude Area Defense, or THAAD, a US mobile anti-missile system installed in South Korea.

Trump and Abe have struck a strong friendship, forged in meetings, phone calls and on the golf course – a friendship that was on display at a Monday evening banquet that was the final event of Trump’s visit. Abe called Trump his “dear friend” and hailed the benefits of what he called “golf diplomacy.”

The two men on Monday also put a face on the threat posed by the North, earlier standing with anguished families of Japanese citizens snatched by Pyongyang’s agents.

Trump and first lady Melania Trump stood with nearly two dozen relatives, some of whom held photos of the missing. Seeking to increase pressure on North Korean leader Kim Jong Un, Trump pledged to work to return the missing to their families, saying “it’s a very, very sad number of stories that we’ve heard.”

North Korea has acknowledged apprehending 13 Japanese in the 1970s and 1980s, but claims they all died or have been released. But in Japan, where grieving relatives of the abducted have become a symbol of heartbreak on the scale of American POW families, the government insists many more were taken – and that some may still be alive.

Though Trump and Abe repeatedly touted their friendship, looming disagreements on trade could strain the friendship.

Trump complained Monday that Japan had been “winning” for decades and rebuked the current relationship, saying the trade deals were “not fair and not open.” He told a group of American and Japanese business leaders: the United States was open for business, but he wanted to reshape the nations’ trade relationship, though he did not say how he would cut the trade deficit with Japan, which totaled nearly $70 billion last year.

He also downplayed the potentially contentious nature of the negotiations, though the Japanese government has not shown much appetite for striking a new bilateral trade agreement. Tokyo had pushed to preserve the Trans- Pacific Partnership, which Trump has abandoned.

“We will have more trade than anybody ever thought under TPP. That I can tell you,” Trump said. He said the multinational agreement was not the right deal for the United States and that while “probably some of you in this room disagree… ultimately I’ll be proven to be right.”

Abe, for his part, publicly deflected questions about trade.

Japan orchestrated a lavish formal welcome for the Trumps, complete with military honor guard and an audience with Japan’s Emperor Akihito and his wife, Empress Michiko, at the Imperial Palace.

As part of the pageantry, Trump and Abe took part in a traditional feeding of koi in a pond Monday. At first, both leaders spooned out small amounts of feed into the pond below. Abe then lightly tossed the remainder of his box into the pond below, while Trump more theatrically dumped the rest of his box down to the fish.