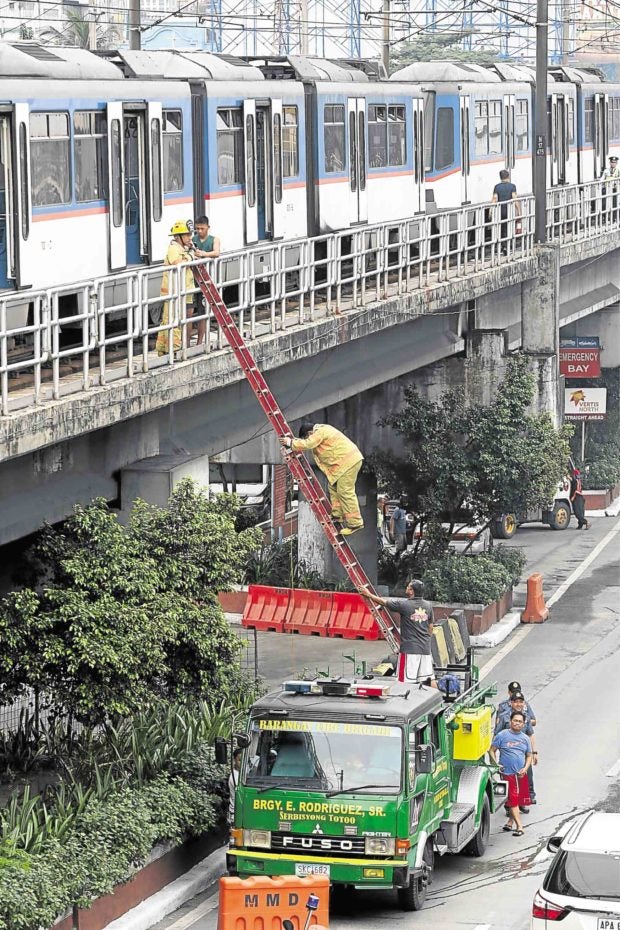 Firemen put out a fire under an MRT3 coach. —NIÑO JESUS ORBETA

The Department of Transportation (DOTr) terminated on Monday its maintenance contract with Busan Universal Rail Inc. (Buri) in the wake of the repeated breakdowns of the Metro Rail Transit-3 (MRT-3), with one train even catching fire over the weekend.

Lawyer Steve Pastor, transport assistant secretary for legal affairs, served to Buri on Monday the DOTr’s final decision to terminate its contract for the maintenance of the MRT-3 for its “failure to address the issues” raised by the agency in its notice of termination last month.

In the Nov. 3 decision signed by Transport Secretary Arthur Tugade, it noted Buri’s “poor performance” and “failure to put in operation reliable and efficient trains” as among the reasons for terminating the maintenance contract that was awarded in 2015.

“It cannot be overemphasized that what is at stake here is the welfare and interest of the riding public. This office could not just sit back and wait while watching Buri trifle and flirt with the lives of the commuting public, with its substandard performance,” Tugade said in the decision.

On Sunday morning, a northbound train caught fire shortly after it left the Araneta Center-Cubao station.

“The contact caused overheating inside the box causing auxiliary wires to burn,” he said.

Buri has yet to issue a statement on the termination of their contract with the DOTr, but in the past it has maintained that their being blamed for the many incidents of train removal and service interruptions was “misplaced,” since “these incidents are mainly caused by MRT-3 system design issues and not by alleged poor maintenance.”

“These are worsened by the decrepit condition of the rails long due for government replacement and excessive loading above the rated usage of the modified coaches. The evidence dates back to long before Buri assumed its contract,” Buri spokesperson Charles Mercado earlier said.

To prevent service interruptions, the DOTr said that Buri’s technical personnel “whose roles are vital in MRT-3 maintenance works” will be absorbed by the MRT-3. It added that additional technical support would also be provided by the Philippine National Railways and the Light Rail Transit Authority. /je