A year after election, Trump polls lowest among recent presidents 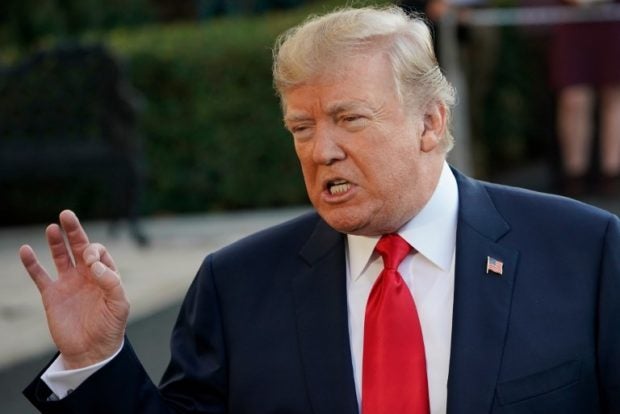 US President Donald Trump speaks to reporters as he and First Lady Melania Trump make their way to board Marine One before departing from the South Lawn of the White House on November 3, 2017, in Washington, DC. Trump is on a 11-day tour of Asia. AFP

The Washington Post, which conducted the survey with ABC News, said Trump’s approval rating was “demonstrably lower than any previous chief executive at this point in his presidency over seven decades of polling.”

Just 37 percent of Americans approved of his handling of the job.

The president’s disapproval rating was 59 percent, with half of those saying they strongly disapproved, both the worst marks of his presidency.

The next highest disapproval rating among presidents stretching back to Dwight Eisenhower was 41 percent, for Bill Clinton, in 1993.

The poll comes as Trump faces a daunting array of political and legal challenges, led by the investigation by special counsel Robert Mueller into possible collusion between Trump’s campaign and Russia.

Trump has also faced setbacks in Congress, notably over his promise to repeal the Obamacare health program and to build a wall on the border with Mexico.

The poll showed voters sharply critical of Trump’s achievements, with 65 percent saying he had accomplished “not much” or “little or nothing,” while only 35 percent said he had achieved a great deal or a good amount.

Could Flynn be next?

The coming months offer Trump a chance, at least, to affect those views, as Congress works on a tax plan that the president has insisted would primarily benefit middle-class Americans.

Whatever happens in Congress, Trump seems certain to be shadowed by the Russia investigation for months to come.

A week after news that former Trump campaign chairman Paul Manafort and two other men had been indicted, NBC reported that federal investigators have sufficient evidence to bring charges against Trump’s former national security adviser Michael Flynn and his son, who has worked with him.

NBC, citing three sources familiar with the investigation, said Mueller was stepping up pressure on Flynn, who served in the White House for only 24 days before being fired amid reports about his communications with Russian ambassador Sergey Kislyak and claims he had misled Vice President Mike Pence about them.

Investigators are examining whether Flynn, in previous lobbying work, had laundered money or lied to federal agents, NBC said.

Two officials told NBC that Mueller’s team was studying whether Flynn sought the removal from the United States of a rival of Turkish President Recep Tayyip Erdogan — the cleric Fethullah Gulen, blamed by Erdogan for inspiring a failed coup — in exchange for millions of dollars. /cbb