Catholic bishops on Sunday led thousands of Church followers in calling for an end to killings in President Rodrigo Duterte’s war on drugs as they urged the police and the military to stop the violence.

The killing of three teenagers in August triggered rare public protests against Mr. Duterte’s campaign against illegal drugs, with rights groups accusing him of committing crimes against humanity in a crackdown that has claimed thousands of lives.

The Catholic Church, which counts 80 percent of Filipinos as followers, has been one of the leading critics of the war on drugs and has launched campaigns to stop the killings, including 40 days of mourning for the victims of the war on drugs, a period marked by nightly prayers and tolling of church bells that ended on Sunday and was replaced by a 33-day campaign called “Heal Our Land.”

The Catholic Bishops’ Conference of the Philippines (CBCP) organized a Mass at Our Lady of Edsa Shrine and procession to the People Power Monument carrying the image of Our Lady of Fatima along the historic highway where a bloodless popular revolt ended the iron-fist rule of dictator Ferdinand Marcos in 1986.

About 3,000 people — including opposition lawmakers, student and religious groups — joined the event, according to police.

They carried candles and placards reading, “Stop the killings. Start the healing.”

“Peace to you in the Armed Forces and the police. Stop the violence and uphold the law,” Lingayen-Dagupan Archbishop Socrates Villegas, president of the CBCP, said in his homily at the Mass.

“If we do not stop the killings, there will be a punishment for a nation that kills its own people,” Villegas said.

Malacañang said it was one with the Church leaders and followers in urging and calling for healing.

Acting presidential spokesperson Harry Roque said the Duterte administration “will never” tolerate extrajudicial killings in its campaign against illegal drugs and that it would allow “constructive dissent.”

“We reiterate that this administration does not—and will never—condone extrajudicial and vigilante killings,” Roque said in a statement.

“As of end-September, and the President himself made a clear stance that any violation committed by the police during operations would be dealt with accordingly,” Roque said.

Critics say that Mr. Duterte’s frequent public pronouncements on the drug war have been direct incitements to kill. 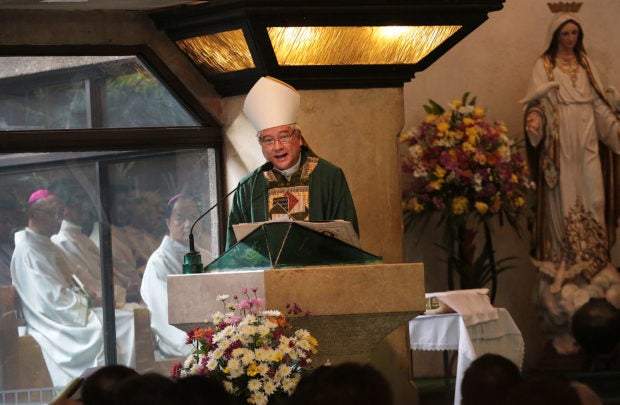 Villegas said the killings tested the nation and cited the case of 17-year-old Kian Loyd delos Santos, who was shot dead by police as he pleaded for his life in Caloocan City in August.

Detained Sen. Leila de Lima also issued a statement, urging Filipinos to revive the spirit of Edsa and to start the country’s healing from the “wound” opened by Mr. Duterte’s war on drugs.

De Lima said the country could start the healing by understanding what caused the wound, which she stressed was the “war on drugs by the Duterte regime.” —Reports from AFP, Philip C. Tubeza, Christine O. Avendaño, Tina Santos and Dexter Cabalza