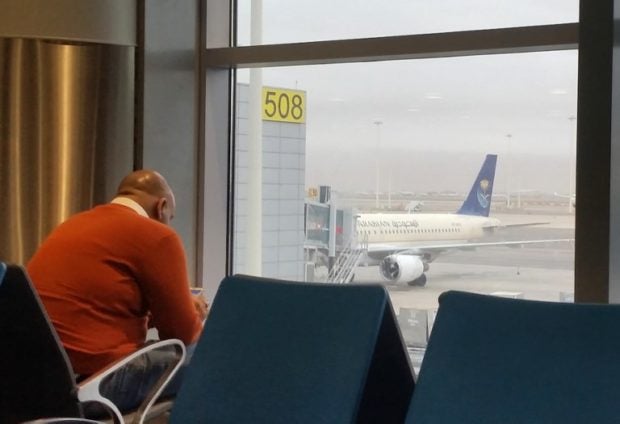 An expatriate, working and living in the Saudi capital Riyadh, waits for his flight at the King Khalid International airport, on February 16, 2017.  Saudi Arabia said its forces intercepted Saturday evening, Nov. 4, 2017, a ballistic missile fired from Yemen toward the airport. AFP FILE

RIYADH, Saudi Arabia — Saudi Arabia said its forces intercepted Saturday evening a ballistic missile fired from Yemen toward one of the kingdom’s major international airports on the outskirts of the capital, Riyadh.

The missile was fired from across Saudi Arabia’s southern border by Yemen’s Houthi rebels, who are at war with the kingdom. Several Houthi-owned media outlets, including Al-Masira and SABA, reported the rebels had launched the missile.

The missile was shot down by Saudi air defense forces, with fragments of the missile landing in an uninhabited area north of the capital. Saudi Arabia’s Civil Aviation Authority said the missile did not cause any damage to the King Khalid International Airport and that flights were not disrupted.

This is the first time that a Houthi missile has come this close to a heavily populated area, and it appears to be the farthest that such a missile has reached inside Saudi Arabia. Riyadh is around 620 miles (1,000 kilometers) north of the country’s border with Yemen.

A Saudi military spokesman condemned the attack in a statement, saying the missile was fired “indiscriminately” toward a populated civilian area.

Saudi military forces have intercepted missiles fired from Houthis several times since March 2015, when a Saudi-led coalition launched a war against Houthi rebels and their allies after they captured northern Yemen and ousted the Saudi-backed president from power.  The kingdom has also imposed an air and sea blockade on Yemen.

The stalemated war has killed more than 10,000 civilians and displaced 3 million others, pushing the Arab world’s poorest country to the brink of famine

The U.S., which is one of the kingdom’s most important military suppliers, has backed the coalition with logistical support.

In the past, Saudi Arabia has accused its rival, Shiite power Iran, of training and helping arm the rebels. Iran denies that it has provided material support, though it acknowledges its political support of the Houthis.

News outlet Al-Masira said the missile launched Saturday evening was made in Yemen and was the third to be fired toward Riyadh this year. It reported the rebels saying the missile was fired in response to “Saudi-American aggression and crimes against the people of Yemen.”

Earlier this week, a suspected airstrike by the Saudi-led coalition killed at least 29 people, including children, in northern Yemen. /cbb