No politics, just prayers for healing in Edsa rally 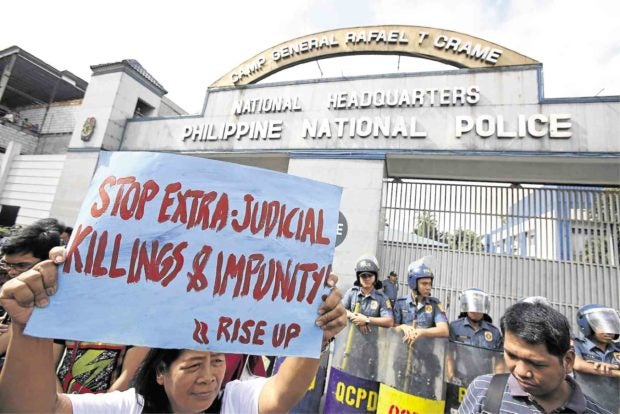 There will be no political speeches.

Today’s Mass and procession at the Edsa Shrine will not be a rally, but a religious activity that will gather the faithful to pray for forgiveness and the country’s healing amid the spate of extrajudicial killings, its organizers said.

“Let us ask that our prayers for the country’s healing be answered. The November 5 activity has no colors. It will stand for transparency, clarity of vision, purity of heart,” Lingayen-Dagupan Archbishop Socrates Villegas said in a video posted on his Facebook account on Thursday.

“We won’t be there to shout and hold a rally. We will pray and whisper to Jesus’ heart to ask for forgiveness, forgiveness for the country that sinned,” added the president of the Catholic Bishops’ Conference of the Philippines (CBCP).

“Although we will tackle relevant issues, this will be through cultural presentations,” David said on Saturday at a press conference in Quezon City with other civil society and lay groups.

“There will be songs, plays, spoken word performances and numbers by artists to discuss issues through cultural presentations, and not by speeches,” added the cofounder of Tindig Pilipinas.

After a 3 p.m. Mass at Edsa Shrine to be celebrated by Villegas, a candle-lit procession will bring the image of Our Lady of Fatima to the People Power Monument.

The activity, dubbed “Lord Heal our Land Sunday,” is meant to be a show of force against drug-related killings and a prayer rally for victims of the drug war.

It will also be a kick-off activity for the 33-day “Start the Healing” period, during which the faithful are requested to pray the rosary and receive Holy Communion every day until Dec. 8, the Feast of the Immaculate Conception.

Groups critical of the administration, such as Movement Against Tyranny and #TindigPilipinas, were also expected to be at the event.

“The appeal is for all to come together and spend this Sunday as a way of pushing for unity, so we can work together for the good of the country,” said educator Bro. Armin Luistro, who said that the activity was open to people of other faiths.

“The call of the CBCP is for all, and this is our response to that call. There’s a cultural presentation so that those from other faiths can also actively participate,” he added.

To critics who ascribe political or “yellow” undertones to the activity, Luistro said there was no more space where people could freely express what they feel, since doing so meant being labeled  “yellow” or described as “destabilizers.”

“We are very concerned about that, that we are being divided into progovernment supporters and destabilizers. This is why we need the healing to begin,” Luistro said.

“It is unhealthy when we are in a system in which there is only one right opinion, and others don’t have the right to express contrary opinions,” said David, who added that the essence of democracy was the freedom to voice one’s opinion.

The essence of government, she added,  is that it is owned by the people and not by particular ruling individuals.

In the Senate, members of the opposition bloc released a statement expressing their support for the Catholic Church’s efforts to promote  national healing.

The church-led activity was a “timely and significant effort” to inspire Filipinos to speak out peacefully against injustice and violence, said the statement signed by opposition Senators Bam Aquino, Risa Hontiveros, Francis Pangilinan and Antonio Trillanes IV.

“We hope the united prayers of the prelates and the faithful will stir the inner voice of our leaders and those who kill the helpless to stop wasting lives and mend their ways,” the senators added.  —WITH A REPORT FROM LEILA B. SALAVERRIA