A UST class project ended up as a viral video on the capital’s need for friendlier sidewalks
By: Jhesset O. Enano - Reporter / @JhessetEnanoINQ
Philippine Daily Inquirer / 05:50 AM November 05, 2017 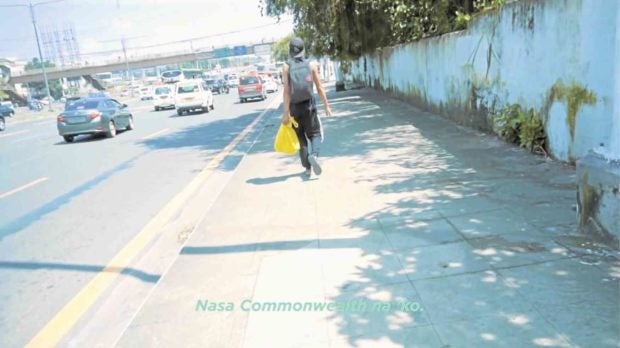 “Why am I doing this?” Mico Taberdo asks in his Oct. 29 video that documented his nine-hour walk from his Manila dormitory to his family residence in Quezon City. The school project ended up as a critique of the how Metro Manila’s roads regard pedestrians.—SCREEN GRABS FROM YOUTUBE

As a Chinese proverb goes, a journey of a thousand miles….

Well, make that a journey of at least 20 kilometers — which still felt like a thousand miles — for Mico Taberdo, who on a recent Sunday decided to walk all the way from his Manila dormitory to his Quezon City home.

The 20-year-old Fine Arts student from the University of Sto. Tomas (UST) did it for a school project, documenting his nine-hour odyssey on a video blog.

The deadline was fast approaching for Taberdo to turn in something for his advertising class. The assignment called for a product ad — so he set out to do a commercial for a certain brand of bottled water.

But the unintended result was not only a 17-minute video which has since gone viral on social media, but also a commentary on how much more needs to be done — or undone — for Metro Manila to be considered a “walkable” megacity.

At 8:55 a.m. on Oct. 29, Taberdo started walking from his dormitory near the UST campus to his family residence in Fairview, Quezon City. The trip led him through the metro’s busiest thoroughfares: España, Quezon Avenue, Commonwealth, Regalado and Quirino.

“Google said it would take me four hours and 30 minutes to get home on foot,” he told the Inquirer on Saturday. “I thought it would be easy.”

He ended up spending twice that much time making his way through the sidewalks, braving the heat and the air pollution, squeezing through narrow passages, avoiding pits left open by construction workers — and encountering at least 17 dogs.

“I was really forced to get off the sidewalk and use the road instead because of the parked cars and construction work,” he said. “I think I even jaywalked across G. Araneta Avenue because the overpass was left unfinished.”

The urban trekker also took note of the blocked ramps supposedly meant for persons with disabilities. Some of the ramps had even electric posts barring the way.

“There were so many obstacles, and pollution really greeted me at Commonwealth Avenue from Quezon Memorial Circle,”  Taberdo recalled.

No dearth of plans

His video — which has been viewed over 31,000 times and has earned over a thousand “likes” on YouTube as of Saturday, expressed the longtime frustrations of Metro Manila pedestrians, who ironically won’t have any difficulty finding plans and solutions proposed every year by urban planners and environmentalists.

Noted architect Felino Palafox Jr. lamented how efforts to make the capital more pedestrian-friendly had been moving at a snail’s pace for the last 40 years.

“Walking is a sustainable mode of transport,” Palafox told the Inquirer. “If we have a walkable metropolis, the P3 billion wasted in traffic daily would be reduced.”

According to international standards for urban design, he said, a third of a city’s road network should be allocated for pedestrians and bicyclists, another third for trees and landscaping, and the final portion for motor vehicles.

“Unfortunately, our facilities favor automobiles, (which make up) the minority,” he said. “Only 2 percent of Filipinos own cars and yet 100 percent are pedestrians.”

“Our mobility is quite condescending to the tsinelas (flip-flops) crowd and looks down on pedestrians,” Palafox added.

Gideon Lasco, an anthropologist, medical doctor and project leader of Walk Manila, noted that “many routes in Manila are actually within walking distance, if only there was proper infrastructure.”

“Walking also builds a sense of community,” he said. “When you walk, you encounter people from various backgrounds, and that makes you care more about issues involving the general public.”

“Sadly, there is a lack of respect for pedestrians. Many drivers don’t respect pedestrian lanes,” said Lasco, whose advocacy group walked the entire stretch of Edsa in 2015 in the hope of starting a public conversation on pedestrian welfare.

For the UST student, the long journey on foot made him look at the metro in a different light.

“When I took up the challenge, I initially thought of the children who would cross mountains and rivers just to attend school,” he said. “Now I feel a stronger connection with those who have such daily struggles. I hope our roads would become more conducive to walking so that many people would be encouraged and see this as a solution to traffic.”

“I think many were able to relate to the video because, at a certain point, all of us thought about our daily commute and asked: ‘What if I just walk home?’”