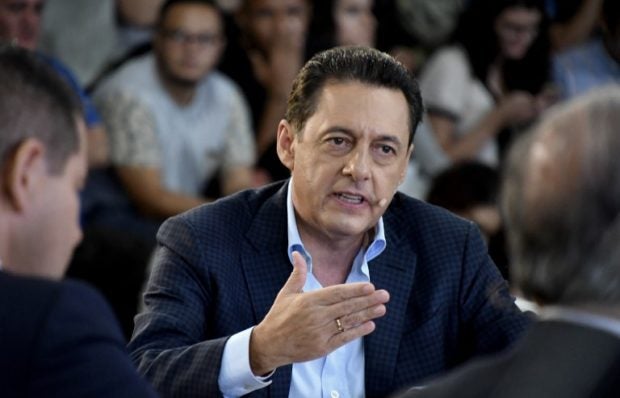 Presidential candidate Antonio Alvarez Desanti of the National Liberation Party speaks during the debate in the prison of La Reforma, in Alajuela, Costa Rica, November 2, 2017.
La Reforma prison is the largest prison in Costa Rica. During the debate the prisoners were the ones who asked the questions in the debate. / AFP PHOTO / Ezequiel BECERRA

SAN JOSE, COSTA RICA — Seven candidates to become Costa Rica’s next president went behind bars to hold an unusual debate in a prison where they answered inmates’ questions about their election platforms.

“I hope you feel at home,” one of the prisoners said as the seven politicians were greeted late Thursday in the gym of the country’s biggest penitentiary, La Reforma, just outside the capital San Jose.

Costa Rica holds its presidential and legislative elections on February 4, and the detention center interaction was a way for the candidates to raise their profiles before campaigning started in earnest. Prisoners have the right to vote.

The prisoners taking part were either serving short sentences or had displayed good conduct during their detention in Costa Rica.

The politicians included Antonio Alvarez Desanti, an opposition lawmaker currently ahead in voter intention surveys, as well as Carlos Alvarado, who stepped down as labor minister to make his tilt at the presidency.

One notable absentee from the debate was former security minister Juan Diego Castro, who is seen in second place in the opinion polls. While a minister, he took a hardline stance against crime and against calls to reduce the prison population.

The debate, organized by the University of Costa Rica, saw prisoners lob questions that included the situation of inmates and the rights of same-sex couples.

According to the justice ministry, the country — whose population is five million — has 36,038 prisoners. Conditions in most of the penitentiaries have been found to be inadequate, with overcrowding a problem.