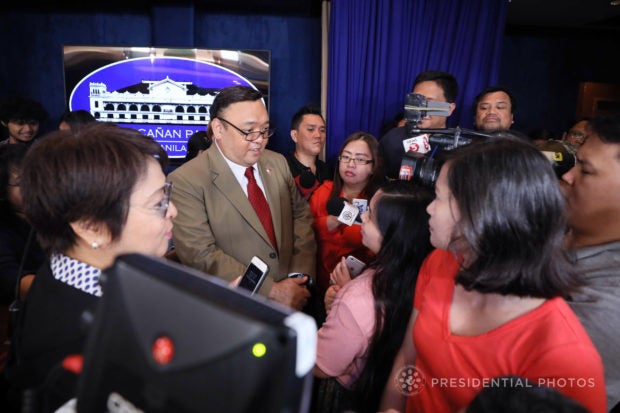 Presidential spokesperson Harry Roque called on human rights advocates to produce evidence and file cases against police or military men involved in cases of abuse instead of just making noise against the Duterte administration.

Roque, who first made a name for himself as a human rights lawyer, said human rights groups should be reminded that police officers should be given the presumption of regularity in the performance of their duties as  practiced worldwide.

“My challenge to human rights advocates is it is not enough to keep on talking and talking,” said Roque in a radio interview.

“You have to get a lawyer, collect evidence and if there is enough, file a case in court,” Roque said.

“We cannot just remove the presumption of regularity because in the whole world, all countries have this presumption,” he added.

He also said this was the reason he welcomed the emergence of a new group of lawyers, educators and students that vowed to  fight human rights violations and the “institutionalized denial of due process” by the government in the enforcement of Mr. Duterte’s bloody campaign against drugs.

“Give evidence to the President, a former fiscal and lawyer, and he would not tolerate killings,” Roque said.

He said cases of human rights abuses were being politicized by opponents of Mr. Duterte instead of being backed by evidence for filing in court.

The Commission on Human Rights should also heed his advice, investigate cases of abuse based on facts and evidence and file cases in court, said Roque.

Roque was starting to get a feel of his new role as an explainer for the Duterte administration amid criticisms about its alleged disregard for human rights.

Mr. Duterte’s tag as a killer, said Roque, was just a product of “miscommunication” which he said he was trying to correct by granting interviews with international news agencies to give accurate information.

According to Roque, he had already been interviewed by Canadian Broadcasting Corp. during which he explained that Mr. Duterte’s promise to protect police officers applied only to those involved in legal antidrug and anticrime operations.