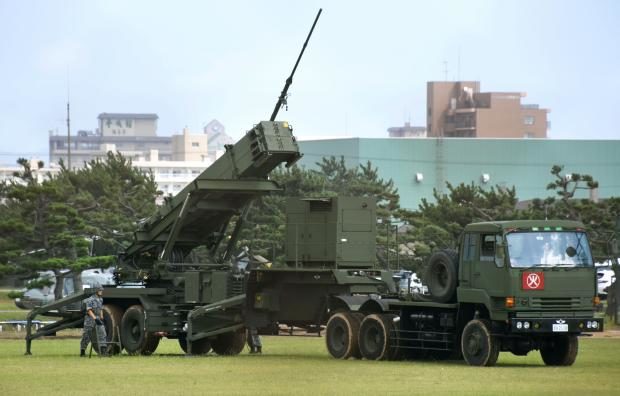 Patriot Advanced Capability-3 interceptor missile system (PAC3) is deployed at the Hakodate base of Japan’s Self-Defense Forces Tuesday, Sept. 19, 2017 in Hakodate, northern Japan. Japan is moving a mobile missile-defense system on the northern island of Hokkaido to a base near recent North Korean missile flyover routes. PHOTO/ Kyodo News via AP

WASHINGTON – US President Donald Trump on Thursday warned China that “warrior nation” Japan could take matters into its own hands if the threat posed by North Korea is not addressed.

Trump’s remarks come ahead of his first visit to Asia since taking office, with soaring tensions over North Korea’s nuclear and missile programs expected to take center stage.

“Japan is a warrior nation, and I tell China and I tell everyone else that listens, I mean, you’re gonna have yourself a big problem with Japan pretty soon if you allow this to continue with North Korea,” Trump said on Fox News.

However, Trump also said that President Xi Jinping has been “pretty terrific” on North Korea, and that “China is helping us.”

After a chiding from Trump for failing to rein in Kim, China has implemented tougher UN sanctions against North Korea, and Xi’s relationship with the US leader appears to be warming.

North Korea in July launched two intercontinental ballistic missiles apparently capable of reaching the US mainland — described by its leader Kim Jong-Un as a gift to “American bastards”.

The North followed that up with two missiles that passed over Japan, and its sixth nuclear test, by far its most powerful yet.

The US president raised the specter of Japan taking action over North Korea as Prime Minister Shinzo Abe continues efforts to change its US-imposed pacifist constitution, seen by conservatives as an outdated legacy of wartime defeat, so Japan can formally transform its well-equipped and well-trained Self Defense Forces into a full-fledged military.

Trump has warned of “fire and fury” in response to Pyongyang’s threats, and derisively dubbed Kim “Rocket Man”, who responded by calling him a “dotard”.

Read Next
How about a vasectomy? Uganda wants more men to say yes
EDITORS' PICK
WHO says not to use ivermectin on COVID-19 patients
Pre-order the new vivo Y20s [G] to get a free TWS earphone
Harry Roque in hospital for COVID-19 treatment
Speed up your game with the new vivo Y20s [G]
Pru Life UK receives four golden arrows for solid corporate governance
PH’s COVID-19 active cases reach over 190k after 12k new infections reported
MOST READ
Stop ‘creeping occupation’ of ‘militia’ boats in WPS, Pacquiao asks China
Bea Alonzo clarifies status of her relationship with Dominic Roque
Convicted former aide of Sen. Bong Revilla dies — BuCor
Locsin to China: ‘Then move out’
Don't miss out on the latest news and information.