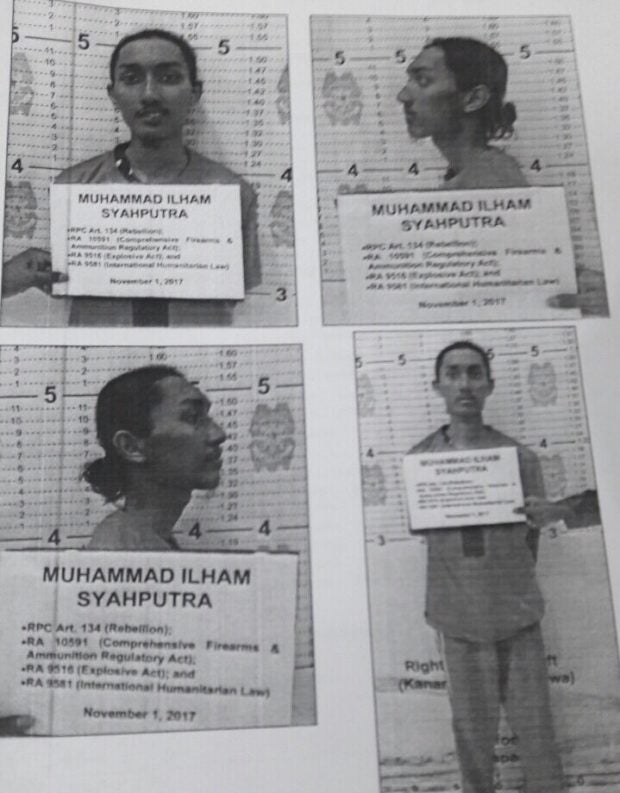 Authorities have filed rebellion charges against an Indonesian national arrested on Wednesday on suspicion of taking part in the attempt by Islamic State (IS) followers to establish an IS province in Marawi City.

The Indonesian, Muhammad Ilham Syahputra, was charged at the Quezon City prosecutor’s office on Thursday with rebellion, illegal possession of firearms and explosives, and committing crimes against humanity.

No bail was recommended for Syahputra as rebellion is a nonbailable offense.

The Indonesian would be detained at the PNP headquarters in Camp Crame, Quezon City.

Syahputra was caught around 7 a.m. on Wednesday in Marawi City’s Barangay Loksadatu.

Police reported confiscating from him a .45-caliber pistol, a fragmentation grenade and a backpack containing a computer tablet and P17,700 in cash.

Investigators said the Indonesian admitted he came to the Philippines in November 2016 to take part in the terror campaign to turn Marawi, a predominantly Muslim city, into an IS base.

He confessed to having 20 other companions in Marawi.

The military was conducting clearing operations in Marawi after declaring the end of the five-month war on IS there but continued to encounter what authorities described as IS stragglers.

At least 165 policemen and soldiers were killed in the fighting and 1,000 others were wounded.