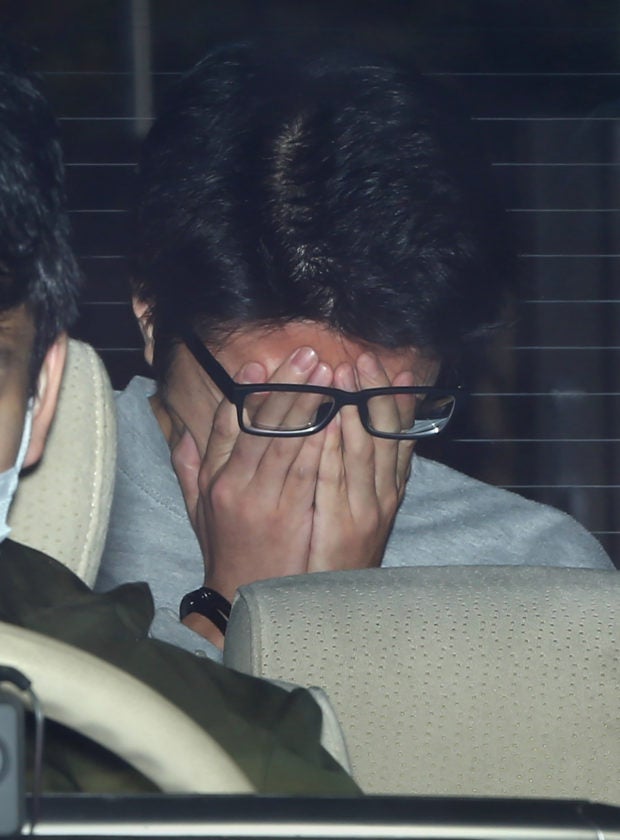 Suspect Takahiro Shiraishi covers his face with his hands as he is transported to the prosecutor’s office from a police station in Tokyo on November 1, 2017. The 27-year-old Japanese man, who was arrested after police found nine dismembered corpses rotting in his house, has confessed to killing all his victims over a two-month spree after contacting them via Twitter, media reports stated. (AFP PHOTO)

Takahiro Shiraishi, the Japanese man who has reportedly confessed to murdering and hacking up nine young people in his Tokyo bathroom, was said to be a quiet schoolboy who would grow up to work on the fringes of the sex industry and become a suspected serial killer.

Pictures of the 27-year-old, who lived in a nondescript flat on a quiet residential street in one of Tokyo’s endless sprawling suburbs, show an ordinary-looking man with neat, dark hair and glasses.

But on the morning of Halloween, police uncovered a grisly house of horrors behind Shiraishi’s front door: nine dismembered bodies with as many as 240 bone parts stashed in coolers and tool boxes, and sprinkled over with cat litter in a bid to hide the evidence.

People who lived in the neighborhood remembered the young Shiraishi as a “quiet child who was able to socialize with neighbors”.

At school, his grades were far from stellar but he was an attentive pupil, who “didn’t especially stand out but was not a gloomy character either”, according to a former classmate cited in the Asahi Shimbun.

He enjoyed athletics and baseball and was “a good listener rather than someone who would speak about himself”, another school contemporary told a local Tokyo paper.

One person claiming to be a former schoolmate took to Twitter saying Shiraishi was so “normal, inconspicuous and low-profile” that most classmates would not even recognize him when reports of his alleged crimes were flashed in the news.

But the warning signs were perhaps there as one elementary-school contemporary told the private Fuji TV network that Shiraishi and his friends enjoyed choking each other for “fun”.

“He once passed out while playing the choking game,” the man, who did not wish to be identified, told the show.

The Mainichi Shimbun has reported that two of the bodies showed signs of strangulation – one had broken neck bones and another had bleeding patterns typically associated with choking.

After graduating from high school in 2009, Shiraishi got a full-time job at a supermarket but quit just over two years later.

At that point, he began to work as a scout for sex parlors in Kabukicho, Tokyo’s biggest red-light district, seeking to lure young women into working in the clubs there.

In February, he was arrested and eventually handed a suspended jail sentence for recruiting a young woman for a sex shop in the full knowledge that she would be pressed into prostitution.

Several people tweeted about a “creepy scout”, with one person apparently employed in the same business as the suspect posting a photo of him with the caption: “Watch out for this scout.”

Shiraishi appeared to have a close relationship with his father, a designer of automobile parts, after his mother and younger sister left to live closer to the girl’s school in central Tokyo.

And a woman who claimed she was in a relationship with Shiraishi until summer 2016 described him as a “gentle character” who was “never angry with women.”

“When I told him that I wanted to break up, he hugged me and said something like ‘Don’t go’,” the woman told Fuji TV.

Things started going downhill for Shiraishi around June 2017 when he is reported to have told his father: “I don’t know why I’m alive.”

On August 22, he moved into the one-room apartment in Zama, a southwestern suburb of Tokyo, which would become the apparent scene of multiple murders.

Shiraishi set up several Twitter accounts, advertising himself as a “professional hangman” and contacting young women who said they had suicidal tendencies.

He is reported to have told investigators that he killed his victims “as soon as he met them” and then “did some work on the bodies” to cover up his alleged crimes.

According to the Japan Times, he told police that it took him three days the first time he dismembered a body but that “from the second person, I was able to do it within a day.”

One former hostess said on Twitter she had a lucky escape after her parlor turned down Shiraishi, who wanted to take her on a “date”.

“The parlor politely declined it but if it hadn’t, I would have been dead, wouldn’t I? I get chills,” tweeted the woman.   /kga