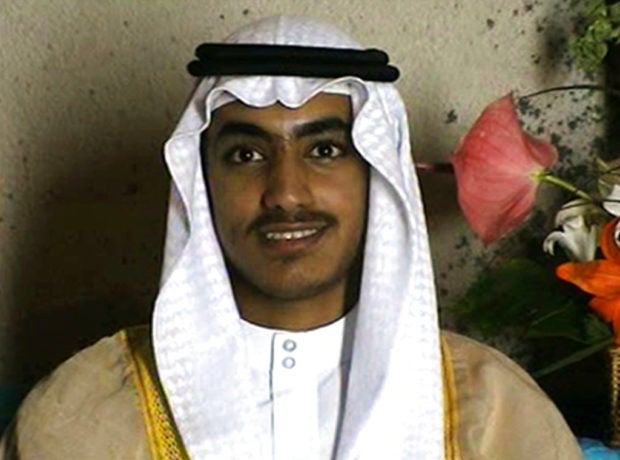 In this image from video released by the CIA, Hamza bin Laden is seen as an adult at his wedding. The never-before-seen video of Osama bin Laden’s son and potential successor was released Nov. 1, 2017, by the CIA in a trove of material recovered during the May 2011 raid that killed the al-Qaida leader at his compound in Pakistan. The one hourlong video shows Hamza bin Laden, sporting a trimmed mustache but no beard, at his wedding. He is sitting on a carpet with other men. (CIA via AP)

WASHINGTON—Never-before-seen video of Osama bin Laden’s son and potential successor was released Wednesday by the CIA in a trove of material recovered during the May 2011 raid that killed the al-Qaida leader at his compound in Pakistan.

The video offers the first public look at Hamza bin Laden as an adult. Until now, the public has only seen childhood pictures of him.

In recent years, al-Qaida has released audio messages from Hamza bin Laden. And to mark a recent anniversary of 9/11, al-Qaida superimposed a childhood photo of him over a photo of the World Trade Center. He is expected to rise to prominence in the jihadist movement and is being closely watched as the rival Islamic State organization suffers setbacks in the Middle East.

One hour-long video shows Hamza bin Laden, sporting a trimmed mustache but no beard, at his wedding. He is sitting on a carpet with other men. A man chanting Quranic verses can be heard in the background. Sporting a traditional white headdress, he verbally accepts his marriage to his bride “on the book of God and the example of the prophet. Peace be upon him.”

“Takbeer!” the others shout, marking his marriage with a kind of religious hooray.

It was the fourth trove of documents, images and computer files recovered during the raid of bin Laden’s compound in Abbottabad, Pakistan. Earlier materials were released in May 2015, March 2016 and in January of this year.

The CIA said the nearly 470,000 additional files offer insights into the inner workings of the terrorist organization responsible for 9/11 and detail its clashes with the Islamic State group, a spin-off of al-Qaida’s operation in Iraq. They also shed light on hardships that al-Qaida faced at the time of bin Laden’s death.

Included is a 228-page, handwritten personal journal of bin Laden and about 79,000 images and audio files, including practice reels of public speeches. Also released were home videos and more than 10,000 video files, including the one of Hamza bin Laden’s wedding.

After shouts of congratulations, the video moves to another location where the groom and others are sitting on a red carpet dotted with bowls of bananas and apples, bottles of cola, sweets and tea. The groom smiles nervously, revealing his dimples. Osama bin Laden is not seen, but a man notes that the “father of the groom, the prince of the mujahedeen” is overjoyed about his son’s marriage and his happiness will “spread to all the mujahedeen.”

At one point, a man stands up and offers a lengthy quiz on the history of Quranic verse, largely for the benefit of young boys in the group who compete to answer the questions. Red heart-shaped balloons decorate the room and in a second video of the wedding, the boys play a rough game of indoor soccer while the adults cheer.

Also included in the material is information about how al-Qaida planned to mark the 10th anniversary of the Sept. 11, 2001 attacks and the network’s work to spread its message through Western media; the group’s effort to exploit the Arab uprisings in 2011; bin Laden’s quest to keep his organization together amid disagreements over beliefs and operational tactics; and the organization’s work to burnish its image with fellow Muslims amid negative media.

There are still materials that have not yet been released. The CIA said this includes materials that are sensitive to national security; those protected by copyright; pornography; malware; and blank, corrupted and duplicate files.

Not all the material, however, was of a serious nature. There was a video known as “Charlie bit my finger!” depicting a boy and his baby brother who bit his finger. There also were YouTube videos about crochet, including “How to Crochet a Flower.”

And bin Laden’s video collection included “Antz,” a 1990s animated adventure comedy about an ant colony, “Chicken Little” and “The Three Musketeers.” Also in the collection were “Where in the World is Osama bin Laden” and several National Geographic programs: “Kung Fu Killers,” ”Inside the Green Berets” and “World’s Worst Venom.” /jpv