Parents of Atio Castillo confident of getting justice for his death

It was Nov. 1, 2016 when Horacio Tomas “Atio” Castillo III complained of the traffic as the family car inched its way through the maze of roads going to the Manila Memorial Park in Parañaque. The Castillos were going to visit the tomb of Atio’s grandfather, Dr. Horacio Castillo Sr.

His father had asked for understanding and explained to him why the family had to go and visit the remains of their patriarch.

“‘We must pay our respects to your lolo [grandpa]. I hope you understand. And ’pag dumating yung time namin ni mama [when our time comes], you would do the same’,” his father recalled saying to him.

But it was different this year: It was his parents – Horacio Jr. and Carminia – who made the trip to visit his tomb.

Atio was killed in a violent initiation rite of Aegis Juris fraternity on Sept. 17.

“Parang baliktad [It’s the other way around],” Horacio Jr. told reporters on Tuesday at the Castillo family’s mausoleum where his son’s remains lie.

“It’s unimaginable,” Horacio Jr. said. “Two months ago magkakasama pa kami. We were living normally. Who would imagine November 1 we would be here? Wala na ang anak namin [Our son is gone].” 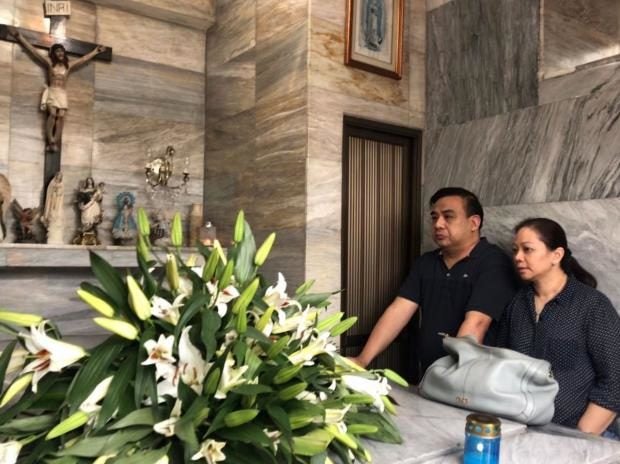 They brought Atio’s favorite chocolates, Ferrero Rocher, which he would eat whenever he was studying for exams and his ultimate “pasalubong” request whenever his parents would return from a trip abroad.

Showing reporters her son’s tombstone engraved with his signature, Carminia said wished nothing but peace and happiness for Atio’s soul and prayed that his grandfather would take care of him in heaven.

“Basta ako, as his mom, all I really want is for him is be peaceful and happy. Okay na ako,” she said.

More than 40 days after his passing, the couple said they were confident they had made a step nearer towards justice they were fighting for. 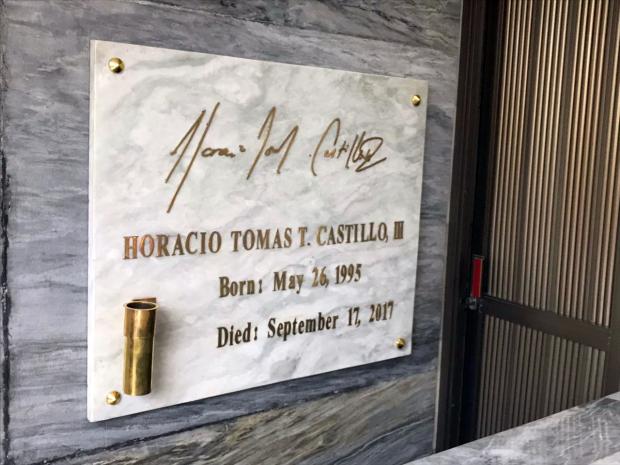 The tomb of Horacio Castillo III, which bears his signature, at the Manila Memorial Park in Parañaque. (Photo by JHOANNA BALLARAN / INQUIRER.net)