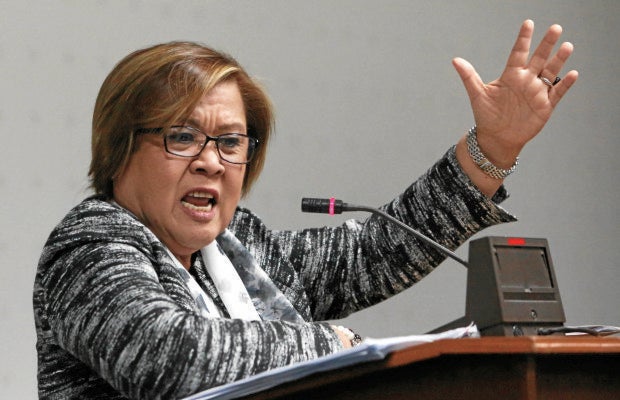 Senator Leila de Lima has lamented the removal of Undersecretary Ernesto Abella as presidential spokesperson, as she panned President Rodrigo Duterte and some of his men who “corrupted Filipino values.”

In a statement issued on Monday, De Lima said: “With the departure of (Usec.) Abella, I fear the even further decline of the level of discourse and language we could expect from now on from the President and his men.”

De Lima cited as examples Duterte’s Chief Presidential Legal Counsel Salvador Panelo and Communications Secretary Martin Andanar, whom she said have “corrupted, contaminated and thrown into the garbage” the “well-preserved values of Filipinos” by “making inappropriately disgusting jokes during interviews.”

“Unfortunately, however, the truth is that they are just a reflection of the person they serve.  No, they do not serve the Filipino people,” noted De Lima, who is in detention at Camp Crame for drug-related charges.

“They serve a baser master, one who revels in their obnoxious character and depravity. One who lets go of a man as decent as (Undersecretary) Abella,” she added.

(Those who are at the bottom who loves to have sex; they are noisy because they can’t have enough sex. If there are kids here, just do not interpret it.)

READ: ‘They’re noisy because they can’t have enough sex’ – Andanar to EU critics

“Well, when I was still a bachelor, they said I f*ck like an 18 year old. I f*ck my clothes like an 18-year-old. Because I travel a lot,” Panelo told Wenger.

Panelo, however, later corrected this by saying that he meant “pack my clothes” and that the radio correspondent merely misspelled the word.

“But their actions and apparent mental state seem to be symptomatic of a prevalent corrupted mindset in our so-called government officials today: why be right when you can be wrong?” De Lima said.

“Why be a good public servant when you can be a bad one? After all, even the President seems to get away with it,” she added.   /kga

Read Next
No number coding on Oct. 31 and Nov. 1 – MMDA
EDITORS' PICK
House energy committee chair Arroyo bats for cheap electricity
Reignite your passion with the vivo Y35
Newbie gamers are in for a treat with the power-packed feature of vivo Y16
Karding damage to infrastructure at P23M
Bongbong Marcos says PH ‘open for business’ with new Clark Airport terminal
Individuals affected by ‘Karding’ now over 157,000
MOST READ
LPA enters PAR, may develop into tropical depression
Angelica Panganiban ‘duguan, sugatang mom’ one week into breastfeeding
LOOK: Catriona Gray moves into her new home ‘Casa Gray’
Security guard shoots 2 other guards dead inside Makati subdivision
Don't miss out on the latest news and information.