Funeral for late Thai king Bhumibol draws to a close 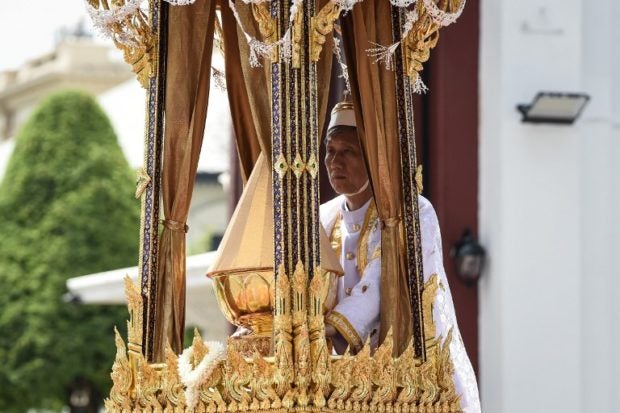 One of the royal doctors holds an urn containing the ashes of the late Thai king Bhumibol Adulyadej atop a royal chariot during the funeral procession to transport his ashes from the Royal Crematorium to the Grand Palace, in Bangkok on October 27, 2017.
Thailand’s new king picked bits of bone and ash from his father’s remains on October 27 to be enshrined as royal relics, after the cremation of the late King Bhumibol Adulyadej capped an extravagant funeral that brought the nation to a standstill. / AFP PHOTO / Lillian SUWANRUMPHA

Bhumibol, a beloved king who died last October aged 88, was cremated on Thursday after a day charged with emotion that brought Thailand to a standstill.

At his death he was the world’s longest serving monarch, striding over seven decades of Thailand’s turbulent modern history, to depart as the kingdom’s chief figure of unity.

But he left behind a kingdom deeply divided along political, economic and social lines, with a junta in charge and democratic government a distant prospect.

As dusk fell on Sunday, his son and heir 65-year-old King Maha Vajiralongkorn and his sister, Princess Maha Chakri Sirindhorn, carried a pair of golden urns containing their father’s relics from the Grand Palace to two Bangkok temples where they will be housed in a cream-coloured Rolls Royce.

A ceremonial cavalry unit with soldiers in full regalia – including blue plumes in their helmets – led the convoy, in a sombre but small procession capping the $90 million funeral.

Buddhist monks led prayers at the temples while black-clad mourners sitting on pavements outside clasped their hands together in respect.

Bhumibol’s reputation as “father of the nation” was buffed up by a careful palace PR machine, while criticism of the king and key senior royals is banned by a tough lese majeste law.

Thais have dressed in black or subdued tones for much of the last year, with black and white ribbons tied to school gates, temples and government buildings.

The prolonged display of official mourning for the late king lapses at midnight on Sunday.