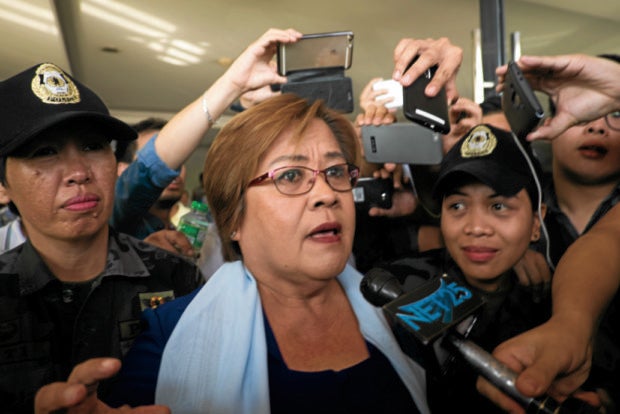 A detained opposition senator is calling for a Senate inquiry into reports that more than 600,000 families face eviction from government housing units where they had been relocated following demolitions of informal settlements in Metro Manila.

Sen. Leila de Lima filed Senate Resolution No. 535 asking the Senate committee on housing and resettlement to look into the plight of residents of Northville, Southville and other resettlement areas for families displaced by demolitions of informal settlements.

De Lima said many of the resettled families had failed to pay amortization for their units in Northville and Southville and their contracts to occupy the houses had been canceled by the National Housing Authority (NHA).

De Lima, in a statement issued from her detention quarters in the main Philippine National Police headquarters Camp Crame, said the mortgage crisis was “threatening to deprive our countrymen of their residences.”

At least 600,000 families from Metro Manila and the provinces of Bulacan, Pampanga, Rizal, Cavite and Laguna had been moved out of informal settlements on the paths of two rail projects—Northrail and Southrail—from 2005 to 2014, according to De Lima.

The displaced families had been relocated to 69 Northville and Southville resettlement areas built by the NHA.

But De Lima said the families were now facing eviction after the NHA issued memorandum circular No. 2506 that canceled the occupancy contracts of families that failed to pay amortization for more than three months and those with contracts that had matured but failed to settle unpaid amortization.

The NHA, according to De Lima, hired collection agencies and law firms to collect arrears without considering the living conditions in relocation sites.

“These collection agencies and law firms do not consider the challenges the residents are facing, most of which arose from or are directly related to their relocation to these remote areas,” said the senator.